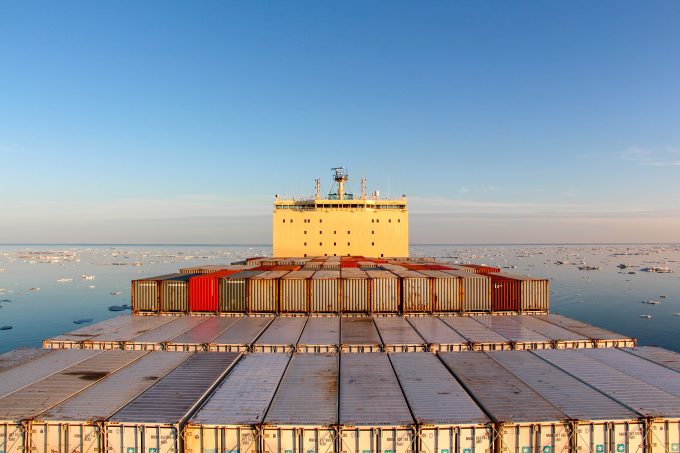 The first Maersk containership to complete the Polar sea passage from Asia to Europe via the North Pole – the so-called Northern Sea Route – arrived in St Petersburg this morning.

It called at Russia’s other main Pacific box port of Vostochny and the South Korean hub of Busan before transiting the Bering Strait on 6 September.

Its next call was Germany’s North Sea transhipment hub of Bremerhaven before its arrival in St Petersburg.

Maersk said although most of the voyage was ice-free at this time of year, the vessel did require the assistance of ice-breakers in the East Siberian Sea. And Maersk says it has no plans to launch commercial services on the route.

“Currently, we do not see the Northern Sea Route as a viable commercial alternative to existing east-west routes. In general, we plan new services according to trading patterns, population centres and customer demand,” said Maersk’s head of fleet, Palle Laursen.

“That said, we follow the development of the Northern Sea Route. Today, the passage is only feasible for around three months a year which may change with time. We also must consider that ice-class vessels are required to make the passage, which means an additional investment.”

During the trial, Maersk was in close and regular dialogue with the Northern Sea Route Administration and ice breaker companies. The crew underwent special training and Northern Sea Route-certified ice pilots were on board for the entire transit.

The Venta Maersk is one of Maersk’s new Baltic feeder class ships, designed specifically to operate in waters of  -25 degrees C where the stronger hull can offer year-round operations.

Venta Maersk is the fourth of seven sister vessels and was delivered on July 11, 2018. Her sister ships are deployed on Sealand Europe & Med’s Baltic feeder network serving Russia through St Petersburg.

They have sheltered forecastle deck for safe mooring operations in winter conditions and enclosed bridge wings for safe manoeuvring and harbour approach.

The first Asia-Europe container vessels have begun to be rerouted around the Cape of Good ...

Against the odds: Ever Given – from Black Swan to white swan

The Ever Given grounding could herald a change in customer-carrier relations.

Against the odds Asia-Europe Black swans Ever Given Evergreen Suez
Mar 26, 2021• 0 Comments• Share

Shippers are bracing themselves for a fresh onslaught of freight rate hikes and peak season ...

Hopes that the Chinese New Year would give container lines breathing space to reposition the ...