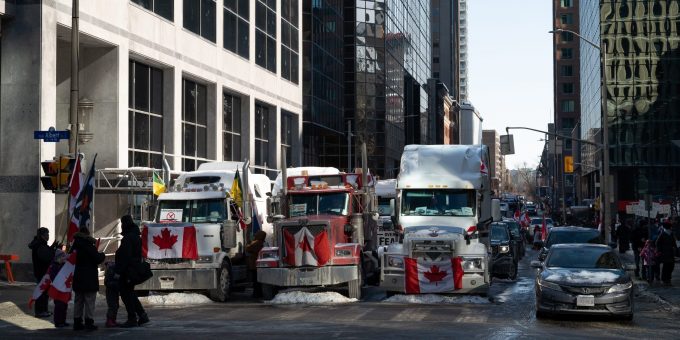 Protests by Canadian truckers against the nation’s vaccine mandate for cross-border trucking are spawning similar plans south of the border.

At least three groups of US truckers are planning treks to Washington to choke traffic around the US capital.

A group calling itself the “People’s Convoy” announced they would be leaving today from two locations near Victorville, California, to protest against US emergency regulations to combat the pandemic that the White House extended last week.

They are also calling for an end to mandates for vaccinations and masks.

“We do not want to be under a dictatorship, communism-style regime,” said one People’s Convoy member.

The protest procession will travel via Arizona, Ohio and Maryland, taking about ten stops during the 10-day journey.

Meanwhile, a group that calls itself the “American Truckers” is planning a similar action and is one of two groups that intend to set out from Ohio. It is unclear how many truckers and supporters will join these motorcades.

Like the People’s Convoy, the plan is to paralyse the Capital Beltway, a 64-mile interstate highway in the Washington metropolitan area that surrounds the capital and its inner suburbs. One participant likened this to a boa constrictor that “chokes and swallows you”.

One of the groups announced thatone lane would be kept open for emergency vehicles, but commuters into Washington would be out of luck.

There have been concerns that the trucker protests in Canada would inspire copycat action in the US. Last weekend, there were protests at the Peace Bridge in Buffalo, a major border crossing, but the protesters made no attempt to interfere with traffic flowing in and out of Canada.

The blockade of the Ambassador Bridge, linking Windsor in Canada with Detroit, which lasted for a week, took its toll on cross-border cargo moves. According to one estimate, the blockage cost auto manufacturers almost $300m. In the first two days of the blockade, US shipments to Canada dropped by about 10%.

“The blockade did not have a big impact, but it forced us to use alternative routes. Some cargo had to go by air,” said Bob Imbriani, EVP international of forwarder Team Worldwide.

Cross-border trucking rates climbed during the protests and have yet to return to previous levels. One logistics operator warned shippers to have a ‘plan B’ in case trucker protests disrupt critical US routes for them.

On the US-Mexico border, on the other hand, there are no signs of protests. Unlike their US and Canadian counterparts, Mexican truckers have not been vocal about vaccine mandates on cross-border trucking that came into effect on 22 January.

For the most part, they are not permitted to operate in the US, so the majority of Mexican truckers hand over their loads at the border to a US-based partner for that leg of the journey.

In an effort to alleviate logistical bottlenecks, the Californian port of Long Beach has called ...