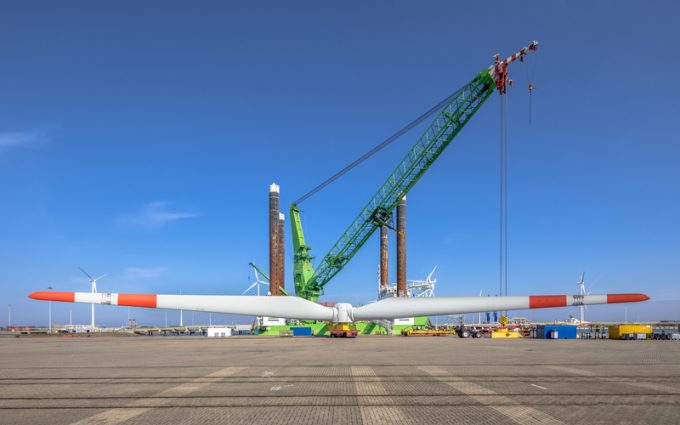 The US port of Virginia is preparing for a lengthy spell of handling materials and equipment for the establishment of offshore wind energy projects.

Last Tuesday, the port’s board of commissioners gave its unanimous blessing to a proposed agreement with Danish offshore wind specialist Ørsted to lease a portion of the Portsmouth Marine Terminal.

The lease is to support the company’s work on the Coastal Virginia Offshore Wind project with Dominion Energy, which calls for two turbines off Virginia Beach that are slated to come onstream some time in 2021.

The lease runs until 2026, so it is likely to come into play for other offshore wind projects along the east coast. Ørsted plans to install nearly 3,000 megawatts of wind energy projects in the US during that period.

The contract is for an initial lease of 1.7 acres at the terminal, but includes options to expand this to 40 acres.

“This is a big step towards making Virginia a leader in wind energy and offshore wind manufacturing,” said state governor Ralph Northam.

“With the port of Virginia at its helm, the Hampton Roads region has the trained workforce and the nautical know-how to become a vital hub for offshore wind development.”

Offshore wind energy is on the threshold of an explosive expansion on the US coast. To date, just a single wind farm with five turbines generating 30 megawatts is in operation off Rhode Island, but a growing number of projects are in the pipeline or on the drawing board.

Offshore wind production in the US is projected to balloon to seven gigawatts by 2030, and more than 20 gigawatts by 2050. According to a recent white paper published by the Special Initiative for Offshore Wind, the market could be worth $70bn by 2030.

At this point the focus is fully on the east coast, where several states have passed legislation calling for offshore wind generation. New York State passed a law last summer that mandates 9,000 megawatts of offshore wind production by 2035.

The port of Albany is gunning for the first two offshore wind developments of New York and got the green light for development last year. The port authority is positioning itself to host a manufacturing site for the installations and to act as a conduit for components to be moved to the wind farm sites.

To that end, it has acquired an 80-acre parcel of land adjacent to its marine terminal, expanding the port’s area by 25%. It is now poised to move forward with a submission for the establishment of the manufacturing facility and a wharf to handle the heavy components.

Rich Hendrick, the port’s general manager, is optimistic. Albany’s location, 124 miles from the project sites, is a significant advantage and it will have all the requisite infrastructure to accommodate both the manufacture and the logistics of the project.

It has also secured support at state and federal levels, which has generated $17m in funding from the latter so far, with more expected from Washington. The overall price tag should run into hundreds of millions of dollars.

Mr Hendrick said the work should be completed within three years, so the port can start shipping out manufactured components by the end of 2023.

Transport is, to a large extent, operated within a network of many different operators that ...

While the US east coast ports are in expansion mode, anticipating growth, the nation’s prime ...

The wave of imports that has overwhelmed Los Angeles and Long Beach has spread to ...

Sustainability, and profitability, in the costly territory that is the 'final mile'

The rapid increase in online shopping in has fuelled the debate on sustainability on the ...

A new car carrier is set to take to the seas within four years – ...