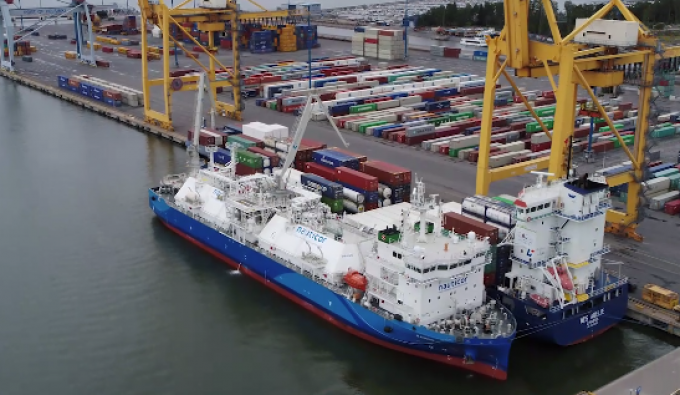 A Unifeeder-chartered vessel is to be used for the first trial of synthetic natural gas (SNG) fuel as a key part of the shipping industry’s quest to decarbonise shipping.

In 2017, the 1,036 teu feedermax Wes Amelie became the first containership in the world to be retrofitted with an LNG fuel system.

Engine manufacturer MAN Energy Solutions and the ship’s owner and manager, Wessels Marine, intend to demonstrate that SNG – produced from renewable electrical energy – can be successfully used as a shipping fuel.

Twenty tons of the 120 tons of LNG the vessel would normally consume on a round-trip voyage on Unifeeder’s North European feeder network will be replaced by the climate-neutral fuel.

MAN and Wessels claim CO2 emissions for the voyage are expected to be reduced by 56 tons.

Stefan Eefting, head of MAN PrimeServ in Augsburg, Germany, said: “We strongly believe a roadmap based on LNG and SNG as fuels can lead the way to a decarbonised future for shipping.”

He added: “Industry and governments need to make an effort now to invest in LNG infrastructure to free the way for SNG-based, climate-neutral shipping tomorrow. Any LNG-retrofitted ship can also run on SNG – that’s what we want to demonstrate.”

Christian Hoepfner, managing owner of Wessels Marine, Hamburg, said: “The initial retrofit [of the Wes Amelie] to LNG needed support from the German government to be financially viable, but it was a huge success for the environment, in that it drastically reduced emissions.

“As a consequence, there is now a programme in place to make more retrofits happen.”

He admitted, however, that the costs of retrofitting were “still way too high” and urged governments and regulators to “work together to make this a viable and available option for shipowners”.

An expert in the field told The Loadstar that retrofitting the Wes Amelie to run on LNG could have “easily exceeded” the asset value of the ship, which according to vesselsvalue data, is $6.7m.

Last week, The Loadstar reported that Maersk had teamed up with industry peers and customers to find a zero-carbon fuel to power its vessels that will be built by 2030.

The carrier said that so far, alcohol, biomethane and ammonia had been identified as the best positioned fuels to reach its zero-carbon goal, and revealed that it was currently laboratory testing the viability of ‘LEO’ fuel – a blend of lignin (a structural bio-polymer) and ethanol.