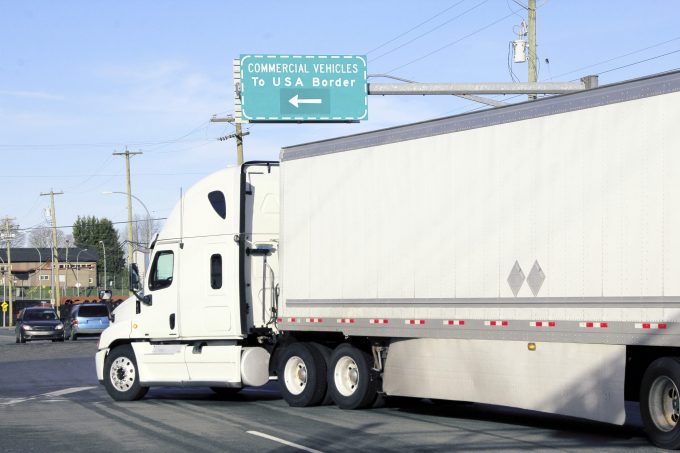 Despite dire predictions of delays, it was almost business as usual for truck traffic from the US to Canada at the weekend, the first two days of new regulations that ban unvaccinated US drivers from crossing the border.

Previously they had been exempt from the vaccine mandate, like other essential workers.

The website of the Canada Border Services Agency (CBSA) shows no significant congestion or wait times at land crossings during the weekend. On Sunday afternoon it showed delays of 15 minutes or less at four locations and only one spot where wait time exceeded that.

Trucking industry bodies had warned of considerable fallout from the new regime. To be allowed entry, non-Canadian drivers had to complete their vaccine course at least 14 days prior, and submitted the information through the CBSA’s ArriveCAN app.

The US is due to impose a similar rule. From 22 January, truckers from Canada and Mexico arriving at the US border must be fully vaccinated to enter the country.

The requirement is a moot point for the vast majority of Mexican truckers, as they are usually not permitted to drive in the US anyway, and tend to hand over their loads to a US trucking outfit at the border.

In the run-up to the new regime, industry groups have warned of serious problems, while the US Department of Homeland Security agency cautioned travellers that border crossing times would likely increase. The Canadian Trucking Alliance (CTA) predicted that the requirement would “definitely have a negative impact” on supply chains.

“There isn’t one aspect of the supply chain that won’t be impacted,” predicted CTA president Stephen Laskowski and, on Thursday, American Trucking Association (ATA) SVP and chief economist Bob Costello  urged leaders in Ottawa and Washington “to reconsider these mandates so we can avoid any further economic disruptions”.

About two-thirds of the goods moved between Canada and the US are shipped by truck.

Both trucking organisations voiced worries that thousands of unvaccinated truck drivers could no longer serve in cross-border haulage. According to the CTA, about 120,000 Canadian and some 30,000 US drivers are engaged in cross-border trucking.

The impact would likely be heavier in the US driver pool. The CTA estimates vaccination rates among Canadian truckers are roughly in line with the national average, in the 83%-87% range. According to a survey conducted in November, almost 55% of US truck drivers were vaccinated and 9% were planning to get a shot, but 36% declared they had no intention of doing so.

The CTA estimates some 12,000 Canadian truckers and thousands of their US counterparts may exit the cross-border segment.

Government agencies had expressed optimism that the mandate would prompt truckers to get vaccinated. However, the CTA stated that only a small percentage of drivers had done so by last week, adding that driver departures and staff turnover had increased.

Some shippers and logistics providers have dismissed warnings of likely disruptions, arguing that companies have had months to prepare for the new regulations, which were announced in November.

Mr Laskowski emphasised that the CTA was not opposed to vaccination. His organisation was calling for Ottawa to work with the industry to push the implementation date back to a “less disruptive” time. On the other side of the border the ATA wants both governments to reconsider the vaccination mandate altogether.

The US organisation had some cause for celebration last week, as the US Supreme Court blocked administration’s mandate that at all companies that employ more than 100 people would have to either ensure all of them are vaccinated or undergo weekly testing.

“ATA has won a tremendous victory on behalf of the trucking industry and workers and employers everywhere,” declared ATA president Chris Spear.

On the Canadian side there was some last-minute confusion about access for unvaccinated truckers under the new rules. Canada cannot ban its own nationals from entering the country, but these drivers have to submit to a test and go into quarantine if found positive if they cannot show proof of vaccination.

On Wednesday, a spokesperson for the CBSA sowed confusion with a statement to media announcing that unvaccinated Canadian truckers would be granted an exemption. But the following day, federal transport, health and public safety ministers issued a joint statement that the information given by the CBSA was incorrect; truckers returning from the US who are not fully vaccinated are subject to PCR testing and quarantine requirements.

US truckers are celebrating after the US Occupational Safety & Health Administration (OSHA) cancelled a ...

Washington is moving to ramp up security against cybercrime in the US transport arena. The US ...

US freight traffic continued to grow in the third quarter, but it is losing momentum, ...

De-regulation in the 1980s paved the way for a worsening driver shortage in the US ...