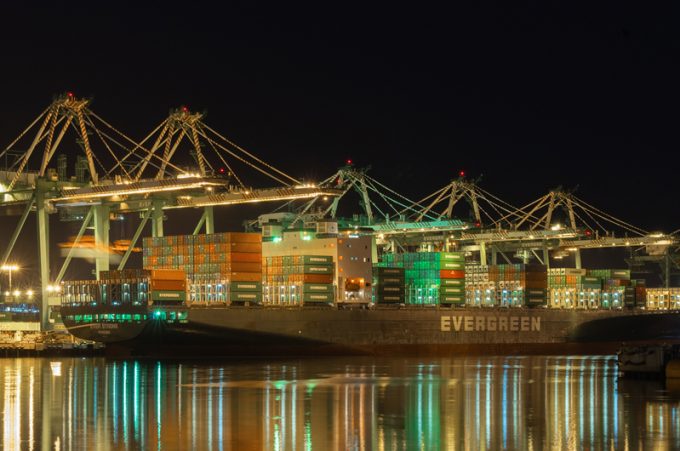 Transpacific container spot rates to the US west coast have powered over the $3,000 mark to hit a record level of $3,167 per 40ft.

The US west coast component of today’s Shanghai Containerized Freight Index (SCFI) soared 17% on the back of 1 August GRIs and is now 100% higher than a year ago.

The spot rate surge represents the highest SCFI reading for the west coast in the decade-long history of the index – and the rate could go higher still in the coming weeks.

After a quartet of successful GRIs, carriers are readying for a fresh, mid-August, onslaught of $1,000-plus increases on the strength of a robust demand outlook for the month.

However, the rush by carriers to reinstate blanked sailings on the route could pour cold water on their prospects.

According to eeSea data, just 10, or 4%, of the scheduled 245 Asia-US sailings in August, and only five in September of a proforma of 243 advertised, are currently void.

For example, THE Alliance yesterday reinstated a further two US west coast and one US east coast voyages for August, which Hapag-Lloyd said was “in view of the increasing market demand”.

The SCFI also recorded a 7% increase in spot rates to the US east coast, to $3,495 per 40ft. Although still a very healthy 25% higher than 12 months ago, the increases have nevertheless not risen as spectacularly as for the shorter transit routes to west coast ports.

The jury is out on how long the tradelane can buck the anticipated demand reduction from the pandemic, although anecdotal reports to The Loadstar suggest that a decline in factory orders could see bookings for September sailings fall significantly.

Moreover, the spike in ocean freight rates, the risk of rollovers, an increase in demand for PPE and peak season electronics launches have put air freight back in the picture.

“The high rates and additional lead time to ship by ocean are pushing some time-sensitive shippers from ocean to air,” said Freightos CMO Ethan Buchman.

Meanwhile, the European components of the SCFI were stable this week, with North Europe ticking up $5, to $901 per teu, and Mediterranean ports edging down slightly, by $2, to $935 per teu.

Despite the introduction of extra loaders from Asia to North Europe, so far there is no hard evidence of rate discounting by carriers.

“We are continuing to see strong demand and we are expecting it to remain the case in the coming weeks,” Martin Holst-Mikkelsen, Flexport head of ocean freight EMEA, told The Loadstar today. “Most vessels out of Asia are still fairly full, but the space situation has improved overall and rolling has reduced.”

He added, however, that he did see “some rate pressure building up” as the carriers sought to fill the additional capacity through August.

Nonetheless, carriers are pushing ahead with increasing FAK rates on 15 August. For example, CMA CGM this week announced increases of $100 for North Europe and the Mediterranean to take both FAK rates up to $2,300 per 40ft.

Patrik Berglund, CEO of freight rate benchmarking firm Xeneta, said it “creates a real challenge for carriers to manage rates and for shippers to know what they should be paying”.