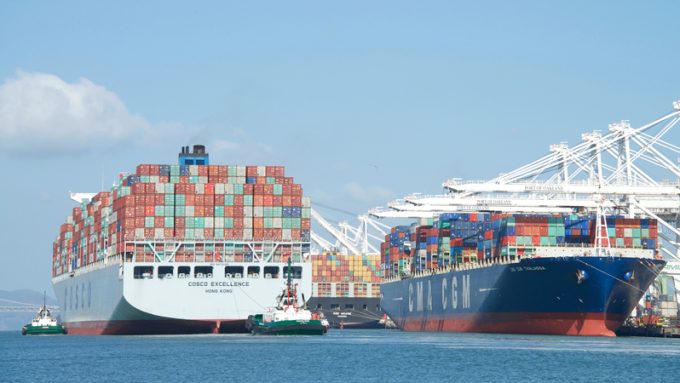 Container shipping lines on the transpacific trade this week continued to announce capacity cuts in response to the US-China trade war.

Following last week’s news that both the 2M and The Alliance groupings would suspend a service each this summer, the latter announced this week it would also withdraw its PSW4 loop at the end of August.

The service deploys six COSCO vessels with an average of 10,000 teu capacity and has a port rotation of Lianyungang-Shanghai-Ningbo-Long Beach-Seattle-Lianyungang.

In combination with the withdrawal of the 2M’s TP-1/Eagle service from 29 June and THE Alliance’s PS8 on 31 July, total capacity on the trade will be reduced by some 31,300 teu a week, or 6.7%, according to Alphaliner.

However it warned capacity would likely increase again due to planned upgrades to APL’s premium services.

“These capacity reductions will be partly offset by the launch of APL’s new Eagle Express X in August and the upgrade of the carrier’s Eagle Express 1, which will add some 6,600 teu of nominal weekly capacity to the route,” it said.

It believed the effect of capacity cuts on spot rates had been dramatic.

“The capacity withdrawals are being implemented during the traditionally busy summer peak season, and they have triggered a sharp increase in spot freight rates from the Far East to US west coast. SCFI spot rates from Shanghai to Los Angeles have risen by 41% over the past three weeks and currently stand at a 12-month high of $1,685 per feu,” it said.

Congestion levels at the major North America container gateways are now expected to persist until ...