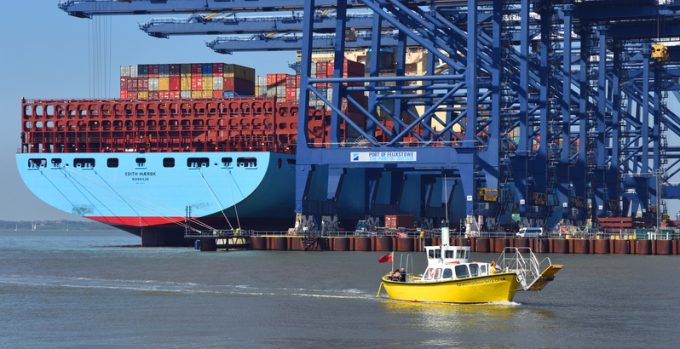 The UK’s biggest container port at Felixstowe (POF) is buckling under the strain of a “sharp spike in import volumes”, triggering hauliers and forwarders to criticise the management’s “contemptuous attitude” towards them.

“It is a complete s**t show and, if we as hauliers treated our customers with the same distain as the POF treats hauliers, we would be out of business by the end of the month,” said haulier David Perfect.

Hauliers like Thurrock-based D Perfect & Sons have reported increasing difficulty in securing bookings on the ports vehicle booking system (VBS) over the past month, with one forwarder sending The Loadstar a screenshot of the sparse availability at Trinity terminal yesterday.

“The ‘UK’s premier port’ is a sign that should be taken down immediately,” said one.

“The shambles that is Felixstowe port is costing everyone time and money. Forwarders, warehouse operators, hauliers and, ultimately, the importers and exporters – but probably not themselves.”

The disastrous migration in June 2018 to a new in-house terminal operating system appears to be at the root of the current VBS problems, as the system is “still not functioning to full strength”, according to an insider.

Mr Perfect told The Loadstar he struggled to find the words to describe the port’s attitude towards his sector.

“The VBS help desk does the opposite job to what it should do. We’re turning away at least 10 jobs a day at Felixstowe. A few years back, 90% of our business was at Felixstowe, nowadays it is just 10%,” he said.

“The Felixstowe Port Users Association has absolutely no leverage with the port, it is just paying lip service, and the lines themselves don’t want to know, they just want their boats emptied,” he added.

“Everywhere is busy at the moment, due to peak season, but at least at Gateway and Southampton they will talk to you.”

And the situation is likely to get much worse in the coming weeks as congestion on the Felixstowe quay forces carriers to “cut and run”, leaving some imports to be discharged at Rotterdam for eventual relay back to the UK, and exports left stranded on the quay.

Felixstowe told forwarders that from yesterday to 7pm on Tuesday, it will not accept export empty containers at the port via rail. Rail providers can only take full containers on the train services from the port; empties must be left inland or diverted to other ports.

Rail is said to account for 35% of the port’s throughput, 30% are empties.

One forwarder, who blamed the problems on high volumes and shortage of labour, noted that the plan would cause major disruption and additional costs.

Two Felixstowe-calling carriers told The Loadstar this morning they had already stopped receiving empties at the terminal and were diverting some exports to London Gateway and Southampton.

“We may well have to skip the Felixstowe call with one or more of our strings in the coming weeks,” one warned, while the other  said the situation at Felixstowe was “currently under review”.

One NVOCC contact told The Loadstar this morning he had been told by a carrier that, after devanning in Essex, he must return his empty containers to Liverpool instead of Felixstowe.

Although there has been no official response or acknowledgement from the port to the widespread complaints, The Loadstar understands from a source that the difficulties “have been caused by a sharp spike in import volumes”, which the port has attempted to mitigate by “releasing additional bookings to help meet demand”.

Against the odds: Your supply chain risks being cancelled by Gen Z

Risk getting rubbed out?