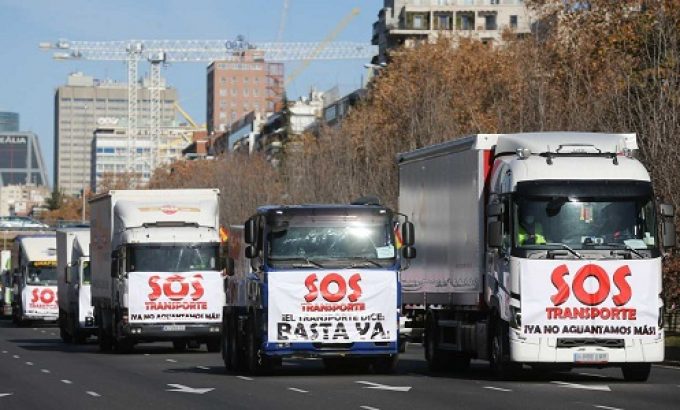 A Spanish government offer of €500m of direct aid to the road haulage sector has failed to end a two-week driver strike sparked by spiralling fuel costs, which has hit production and manufacturing.

From 1 April, the financial package, which focuses on a reduction in the so-called ‘professional diesel’ tax, was announced this week by Spain’s transport minister, Raquel Sánchez, following a meeting with the country’s National Committee for Road Transport, said to represent 85% of the companies in the sector.

It will be approved by Spain’s Council of Ministers on 29 March.

However, three trade unions, representing mainly small-to-medium-sized firms, have joined the Platform for the Defence of the Freight Transport Sector, an informal association of the truck drivers and owner-operators who were the prime movers behind the strike, which began on 14 March.

In a joint statement, the three unions said the government’s plan was “vague” and did not specify “what it will comprise, how it will work and, more importantly, how much aid each trucker would get”.

They added: “In addition, we do not understand how, in other neighbouring countries, their governments have already specified the measures they are going to apply to their carriers to help them overcome the current crisis.”

The strike – in the form of  trucks blocking roads and intersections near Spain’s ports and industrial and commercial zones – has disrupted supply chains in a number of industries and caused sporadic shortages of perishable foodstuffs such as eggs and dairy products.

This week, food processing multinational Danone warned of an “imminent supply rupture” because of the truckers’ strike, adding that if a solution was not found rapidly the company would have to “take drastic decision” and “temporarily interrupt activities” at its four Spanish dairy plants and three mineral water plants.

Yesterday, it was reported to have halted production at one of each and Dutch brewer Heineken has also warned it may have to cut back on production, due to a lack of some supplies.

German supermarket chain Lidl has closed two stores in Asturias, due to supply difficulties, while other retailers, including Aldi, have reported shortages of certain products, such as milk, flour and oil.

The prospect of a prolonged strike has raised fears of empty shelves in supermarkets and a threat to Spain’s road-borne exports of fruit and vegetables at a crucial time of year for the market.

According to local media, the strike is also affecting the automotive sector, with assembly lines disrupted by haulier picketing and roadblocks. Production at Volkswagen’s plant in Pamplona has been hit by lack of supplies, and Ford has proposed temporary lay-off plans for workers for the second quarter in plants that are struggling to get delivery of vital components and microchips. Opel and Mercedes have also been forced to curtail operations.

The Spanish government is said to have mobilised 24,000 police officers to help, escorting truck drivers who aren’t taking part in the strike.

MW: Danone to sell assets and shake up its management to cope with pandemic

MARKETWATCH reports: Shares in Danone rose more than 2% on Monday, after the multinational food and ...