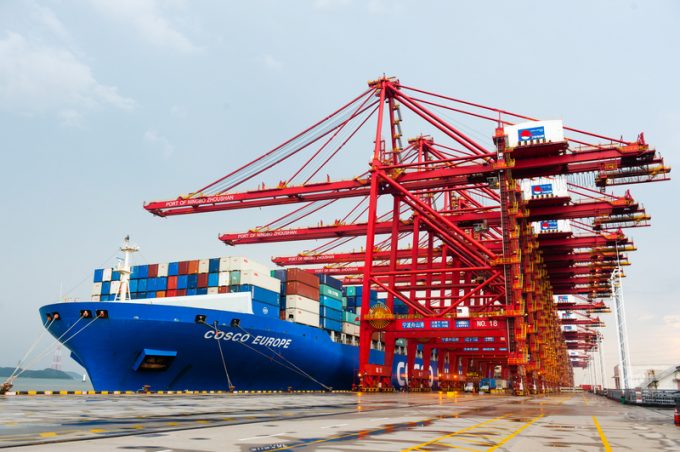 In a customer Q&A session this morning, Hapag-Lloyd CEO Rolf Habben Jansen said the carrier was still “flooded with bookings”.

He said: “It will be well into the second quarter before we get back to anywhere near normal,” And he added: “For the first time in 10 years we are earning back the cost of our capital.”

With the Chinese New Year holiday commencing next Friday, 12 February, this would normally be the period when carriers start discounting to protect volumes during the subsequent slack weeks, however there is no evidence that any special offers are being made this year.

One UK-based NVOCC told The Loadstar this week his Asia-North Europe carriers were “not interested” in discussing an extension of his short-term contract.

“Where is the representative of the top carrier now that its ships are full?” he asked. “In the past, he was pestering us daily for forecasts, but now our calls and emails go unanswered.”

This week, the Ningbo Containerized Freight Index (NCFI) component for North Europe edged down slightly, to $6,758 per 40ft, attributed to a “slight decline in demand” as some factories closed early for CNY due to Covid travel restrictions.

However, the FBX (Freightos Baltic Index) for North Europe was virtually unchanged, at $7,827 per 40ft.

“As CNY approaches, it remains to be seen how extensive the closure of manufacturing will be, and the extent to which trucking will be affected as the government enacts travel and quarantine rules to help contain the latest outbreaks,” said Judah Levine, research lead at Freightos.

However, it is clear that in practice shippers are paying significantly more, after taking into account equipment and space guarantee fees and various other charges levied by carriers.

“If we don’t agree to pay all these extras, carriers won’t even entertain our bookings,” a forwarder told The Loadstar recently.

Meanwhile, on the transpacific, the congestion at the San Pedro Bay ports of Los Angeles and Long Beach appears to be getting worse, with the south California ship traffic agency Marine Exchange constantly recording more than 40 ships at anchor, or in drift zones, awaiting berths.

There are also reports that congestion has spread to the port of Oakland, after carriers diverted some services to San Francisco Bay.

“We are expecting bookings to come back strong, post CNY,” said Jon Monroe of Washington state-based Jon Monroe Consulting, adding that the congestion was likely to “get worse before it gets better”.

However, similar to the European trade, shippers are often paying considerably more in the form of equipment and space guarantees, alongside racking up substantial demurrage and detention charges.

“It has been reported that more than $3m worth of demurrage and detention charges have been billed by terminals and carriers,” said Mr Monroe.