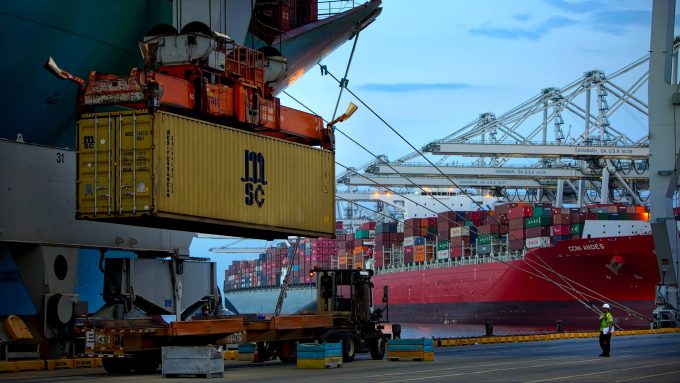 In a speech in Minnesota  yesterday, President Biden acknowledged the support for his infrastructure bill across the political divide.

He said a new America was about to evolve, “fit to meet the competitive edge of the 21st century”.

The president explained this would require: “Training as construction managers to oversee all phases of construction projects we’re going to be seeing all across Minnesota, like the Twin Port Interchange and Ports Interchange in Duluth and the Link project in Rochester”.

He claimed: “These are the jobs of today and tomorrow,” and added: “We’re getting back in the game”.

It is certain that President Biden has a nervous eye on mid-term elections next year, but how the administration is dealing with the country’s complex logistical challenges today will likely play a greater role in the upcoming vote than the more long-term Infrastructure Bill.

According to the White House, there is a new momentum at the ports of Los Angeles and Long Beach.

“This week, the companies operating the ports will eliminate fees for night and weekend pick-up of containers. That means that containers moved off-peak can be moved for free – creating a further incentive for companies to utilise these hours.” The exemption will run until the end of January.

In a further move to spread the load at the congested southern California ports, CMA CGM has become the first major carrier to introduce an incentive scheme for the early collection of boxes, offering a $100/box discount for those collected during weekdays, as long as they have been at the terminal for eight days or fewer, and a $200/box discount for boxes picked up at night or at weekends within the eight-day dwell period.

This incentive scheme will run for 90 days from today.

According to the White House, these developments will increase the velocity of cargo through these major facilities, easing congested supply chains, with some success in this regard already claimed.

Again, according to White House statistics, LA and LB handled a combined 410,000 import containers in the two-week period from 31 October to 13 November, an increase of 16% on the previous peak in 2018. And the two-port complex managed to reduce the number of import containers sitting at the terminals for longer than nine days by 41%, to 75,000, during November.

That was achieved without the imposition of an announced levy on long-stay containers that was supposed to be collected from 1 November. It was delayed  and is now due to be imposed on 6 December.

The White House claims these measures are shifting the US logistics industry towards 24-hour operations, and the US Department of Transportation has extended the flexibility on the number of hours truck drivers can work through to the end of February next year.

In conclusion, the White House said San Pedro Bay ports were not the only facilities to have improved their performance, although Los Angeles and Long Beach handle 40% of US imports between them.

“Looking at the top four container ports in the country, Los Angeles, Long Beach, New York-New Jersey and Savannah, the number of loaded containers imported is 21% above 2018 over the same period. Ports across the country have been succeeding, as a whole, at moving more goods than ever, and the administration’s port action plan will help accelerate the investments at our ports from the Bipartisan Infrastructure Law.”

If President Biden succeeds in building bridges across the political divide and in the real world, it is likely that his mid-term election campaign prospects will improve. But it is the here and now that will determine whether the economy continues to be stifled by chronic congestion.