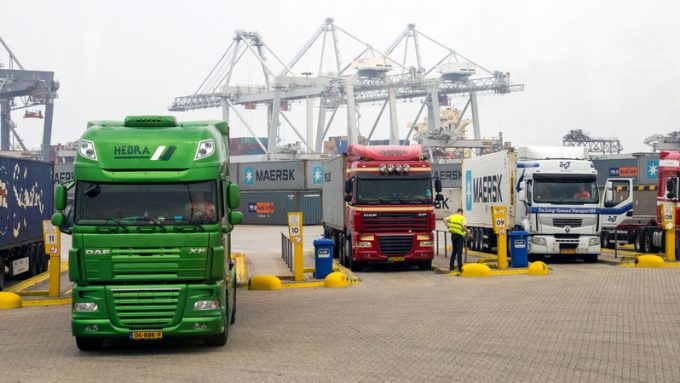 Global port industry players met in person for the first time in two years at this week’s TOC conference in Rotterdam, and opinion diverged on whether the congestion crippling terminal operations worldwide could end anytime soon.

Eleanor Hadland, senior ports & terminals analyst at Drewry, told delegates a recent survey by the consultancy showed “shippers don’t expect port congestion to improve until the second half of 2023, while freight rates are never going to return to pre-pandemic levels”.

Lamia Kerjoudj-Belkaid, secretary general of the Federation of Private Port Operators (Feport), agreed it would take until next year for the congestion in European ports to begin to abate.

She said: “The ports are still worried about the bulk of ships coming from Shanghai since its lockdown ended,” adding there was “an avalanche of vessels coming to Europe, but the yards are already fully occupied”.

“I was in Hamburg recently and it was like trying to find something when you are moving house and all your possessions are in boxes.”

Ms Kerjoudj-Belkaid added: “Ports don’t have visibility of the contractual relationship between carriers and freight forwarders. It’s a ‘black box’ and something we need to improve, because we don’t know what the next mode of transport is [after a container is unloaded in a port], which means we can’t optimise yards.

“There needs to be a stronger awareness of the impact of any shipping decision on ports – and the lack of communication and poor schedule reliability is always a problem.”

However, Johan-Paul Verschuure, project director at Rebel Group, believed the worst of the congestion could be behind the industry, and even warned it could be entering a “dangerous new period of overcapacity”.

“It is surprising how quickly the congestion hot spots can change – last autumn congestion was spread out across north-west Europe, but today it is heavily focused on Bremerhaven and Hamburg, which have been hit by strikes in recent days. They also have transhipment cargo waiting to go to Russia and export cargo for Asia waiting to be loaded.

“The vessel waiting time for Hamburg is now ten days; seven days at Bremerhaven, while in Antwerp and Rotterdam it is just over two days – but from my point of view, we are now nearing the point where the congestion can be cleared up; we see the disruption clearing.

In fact, Mr Verschuure said, he was concerned that the industry may be on the verge of returning to the type of ruinous overcapacity that characterised the post-global financial crisis era.

He said: “The recent strong volumes to North America aside, there is actually only very modest growth in the main east-west trades, while over the past year or so the orderbook has exploded, so shipping capacity is going to go up quite a bit. If you add reducing demand to an easing of supply chain congestion, it sounds to me a lot like 2010 – and if the driver shortage crisis can be resolved, we could actually see the same cocktail we saw 10 years ago.”

However, Ms Hadland suggested the congestion would only ultimately be cleared by improving the flow of information which accompanied the cargo, adding:“We need the infrastructure to enable the handling of data and finance to be as good as the physical handling of goods.

“Look at the shortsea ro-ro trades between Europe and the UK – they are really efficient, despite Brexit, and if they can exchange that information about that freight in a crossing that takes five hours, surely it must be possible on a sailing that takes five weeks?”

But she also noted that the physical capacity of Europe’s ports had been dented by the increasing number of container exchanges per vessel call.

“There has been a steep reduction in port connectivity – the carriers have streamlined their schedules and, in the first quarter of this year, throughput has been down, but vessel calls are down by even more and, as a result, average exchanges have gone through the roof, which represents a huge peaking factor.

“It now takes longer to handle 1,000 teu than it did in 2019 – in Hamburg, it takes 32% longer, in Antwerp 31% and Rotterdam 7% – and the capacity of ports has been pushed by the peaking and higher exchanges,” Ms Hadland explained.