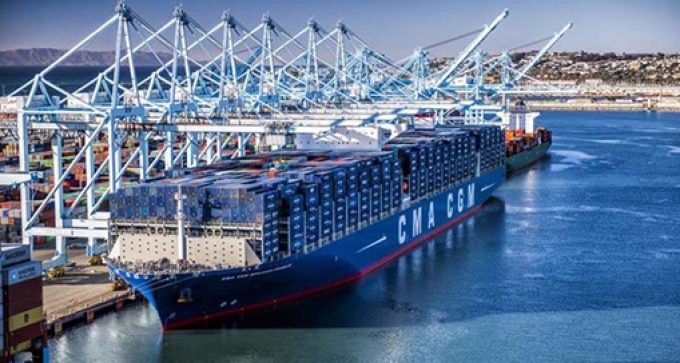 CMA CGM as an ocean carrier increased its market share in the third quarter, growing liftings by 4.1% on the same period of the previous year, while most rivals reported negative growth.

The French transport and logistics group carried 5.67m teu across its container service network during Q3, versus 5.45m teu the year before, for revenue of $15.71bn, which was 25.8% up on the previous year, giving an average rate of $2,771 per teu.

Including its logistics, ports and airfreight businesses, CMA CGM posted group turnover of $19.91bn, up 30% on the previous year, for an ebitda of $9.15bn and a net profit of $7.04bn.

This takes CMA CGM’s earnings for the nine months to a huge $29.2bn, compared with $12.1bn in 2021, but it warned that it expected “a faster return to more normal freight rates in the fourth quarter, and lower margins”.

CMA CGM is battening-down the hatches and preparing for much leaner quarters by paying down $5.3bn of debt during Q3, to leave the group with a strong balance sheet showing just $78m of debt at 30 September.

The group said it was being battered by higher operating costs at the same time as freight rates were plummeting. Higher energy prices, resulting from geopolitical instability, had led to a year-on-year $822m increase in bunker costs in the quarter, and the slowdown in demand had pushed down spot freight rates, “particularly on main east-west trades”.

CMA CGM’s logistics revenue was $4.34bn, up 51% on Q3 21, for an ebitda of $359m, which was 33% higher than the previous year. It said its contract logistics business “continued to recover”, and the division’s ebitda was “lifted by the acquisitions of Ingram Micro CLS, Colis Privé and Gefco.

Meanwhile, compared with its peers in the liner sector, CMA CGM was more successful in holding its volumes during the quarter, and much more successful in maintaining growth against a global 2% to 4% contraction in demand. This saw Maersk, for example, report a 7.6% year-on-year reduction in volumes for the period.

And to put CMA CGM’s 4.1% growth in Q3 into context, CTS data recorded a 3.9% contraction in container volumes during the period.

CMA CGM is the final carrier of those that publish their results to report earnings for the period. This has enabled US-based Blue Alpha Capital founder John McCown to calculate – based on carrier earnings published and a pro rata estimate for those that do not – that the industry’s profit for Q3 hit an eye-watering $59bn, for a massive full-year projection of $233bn.

Notwithstanding collapsing demand and freight rates, Mr McCown does not subscribe to the view that the liner industry is hurtling towards bankruptcy, noting that “improved results have a long tail, even as supply/demand conditions change”.

Moreover, he suggests there is too much emphasis on the importance of spot rates, given that a “majority of containers move under contracts that are renewed throughout the year”.

He added: “Contracts can be renewed at higher rates even during periods when spot rates are dropping, even materially.”