News / 'No carrier too big to fail': forwarders and shippers need visibility into their finances

Forwarders and shippers must do as much due diligence as possible on ocean carriers, as the threat of another failure in the shipping industry remains high, consultants have warned.

The problem, however, is that it is almost impossible to say which line may fail – and to try to predict it can become a self-fulfilling prophecy.

“The only surprise about Hanjin was that it was Hanjin, not someone else,” Alan Murphy, CEO of SeaIntel told the FIATA World Congress in Dublin last week.

“Hanjin was not massively worse off than the rest of the industry. Its volume growth, in fact, was better than the rest.

“Its revenue per teu was challenging though. What went really badly was its debt ratio.

“Just based on the numbers, HMM looked worse than Hanjin. But it comes down to an ability to raise capital and work with creditors. It was impossible to predict – and you can’t predict who will be next.”

He added: “One of the reasons Hanjin didn’t get saved was that it didn’t have a very attractive fleet.”

Drewry yesterday also issued a warning to the market.

“All stakeholders must understand that no carrier is too big to fail. The expectation that some white knight would rescue an ailing carrier has been erased forever.

“Secondly, while Hanjin’s financial position was at the extreme edges and its demise is not expected to create a domino effect, a number of major carriers are still struggling and the risk of another following the same path as the Korean line cannot be discounted,” warned the consultancy.

“Any company doing business with ocean carriers must undertake more due diligence than previously.”

This could be harder than it sounds however. The Loadstar learned that one forwarder stopped booking with Hanjin two years ago – yet still ended up with significant exposure to Hanjin vessels through other lines and partnerships. 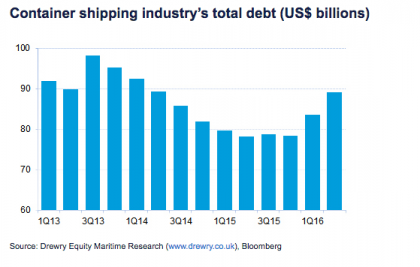 Mr Murphy added: “29 carriers were loading containers on Hanjin vessels when Hanjin was not on the bill of lading. Hanjin vessels were deployed on 20 different services.”

While both consultants advise more due diligence, they both acknowledge the difficulty of getting transparency into carrier finances. But shippers are starting to request data from the lines, said Drewry.

“Some large shippers are now requesting access to “hidden” financial information, in return for signing a non-disclosure agreement, before entrusting their cargo. As more shippers demand access to financial data during contract negotiations it will become harder for secretive carriers to hold down the drawbridge.”

Even with this visibility, however, it’s difficult to get a complete picture.

In 2015 – one of the worst for the industry as it fought weak demand and overcapacity – the lines made a combined profit of $2.7bn. However, explained Mr Murphy, those profits were inflated by some $4bn from the time lag in the bunker adjustment factor (BAF). The industry should have recorded a loss of $1.3bn.

This is likely to rebound on them in the third quarter, he said. “We are very pessimistic,” he added.

SeaIntel estimates that the industry can support eight global companies by 2025 – there are currently 13 major lines.