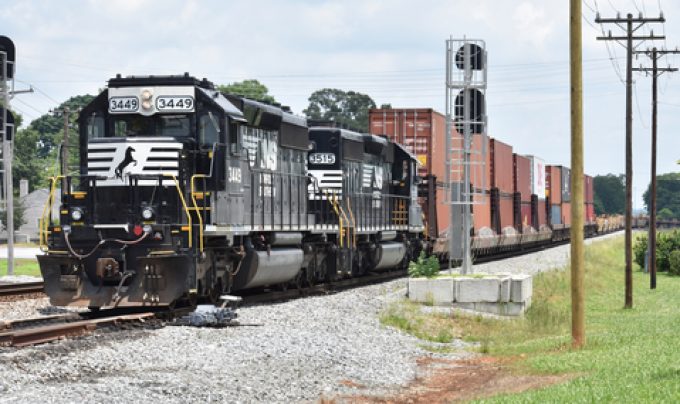 Strained supply chain infrastructure in the eastern and southern US raises questions about changes to Asian import flows, as rail services try to maintain cargo flow.

Norfolk Southern (NS) is struggling to cope with container volumes pouring into its rail heads in Kansas City and Memphis from ports on the eastern seaboard. On 6 September the Class I railway announced that it was opening two auxiliary container areas near its terminal in Memphis, as the facility had reached capacity.

Between them the two new container lots can accommodate about 2,000 boxes, which triples NS’s yard capacity in the Memphis area.

The day before NS had opened an auxiliary container yard in Kansas City to ease the pressure on its main terminal there. The new facility has been designated to handle 53ft domestic intermodal containers to free space for international traffic at the main terminal.

The new lot is the rail carrier’s second auxiliary facility in the Kansas City area. Already in August NS had opened another lot near its terminal. Together the two can hold 450 containers.

NS management has blamed the strain on its rail heads on the surge of imports that have poured through gateways on the east coast, from the port of New York & New Jersey down to Savannah and to the US Gulf. Box dwell times at its Memphis terminal lately have been double what they were two years ago.

In addition, vessel congestion has soared at east coast gateways. According to Hapag Lloyd, there were 16 ships waiting for berth space at New York & New Jersey and 43 at Savannah on 2 September. These two port complexes account for much of the container volumes at the NS terminals in Kansas City and Memphis.

In stark contrast, the number of container ships waiting off the port complex of Los Angeles and Long Beach was in single digits at the end of August.

For years ports on the east coast and in the Gulf of Mexico have grown their share of US waterborne imports from Asia, but this year the momentum accelerated dramatically. According to PIERS, traffic from Asia landing at the east coast was up 14.3% year-on-year, while the Gulf ports registered an increase of 24.2%.

The congestion that afflicted Los Angeles-Long Beach through last year and into 2022 prompted many importers to divert at least part of their imports from Asia to the east coast or Gulf ports. This was reinforced by fears that the contract negotiations between west coast terminal operators and port labour might lead to a stand-off that would paralyse flows through these ports.

East coast ports have been gaining market share in the Asia-US trade for years, but the recent tsunami of traffic they have encountered caught them flat-footed, remarked Craig Grossgart, SVP global ocean of Seko Logistics.

It also overwhelmed the other players in the region, including warehouse operators and carriers. On the warehousing front there have been frantic efforts to remedy the situation. In and around the port of Savannah about 2.79m sqm of warehouse space is coming up, according to one source.

Rail carriers are struggling to adjust. The surge in import containers has overloaded their terminals and rail heads, with a knock-on effect on exports. As import boxes piled up and filled facilities and left little space to handle outbound freight, carriers like NS have had to put the brakes on exports. NS has put ceilings on the number of export boxes to be moved from its facilities in Memphis and Kansas City.

The rail carriers’ ability to cope with the situation has been weakened by their pursuit of precision railroading, Mr Grossgart noted. They have shed equipment and staff and closed infrastructure, which they are now scrambling to replace – with limited success.

Moreover, while the rail carriers were making cuts and streamlining operations, the size of container vessels has gone up, leading to a widening mismatch between arriving containers and rail capacity to carry them, Mr Grossgart remarked.

These developments suggest that it will take time for cargo infrastructure in the eastern and southern US to catch up with the elevated traffic levels. The question is how far the recent rise in flows through east and Gulf coast ports will reverse, as shrinking demand whittles down volumes and the west coast labour negotiations are completed.

“It will take months to flush out the system, but congestion will certainly ease as we move into 2023,” he commented.

One development that suggests that the large shift of flows from west to east coast may have been temporary is that inbound bookings through the ports of New York-New Jersey and Savannah have dropped by about 50% since May, according to Freightwaves’ Inbound Ocean TEUs Volumes Index.

Some forwarders are not convinced, predicting that traffic from Asia flowing through ports on the US east coast and the Gulf region will continue to rise. For logistics infrastructure and service providers in these areas, especially the railways, this calls for urgent steps to beef up capacity.