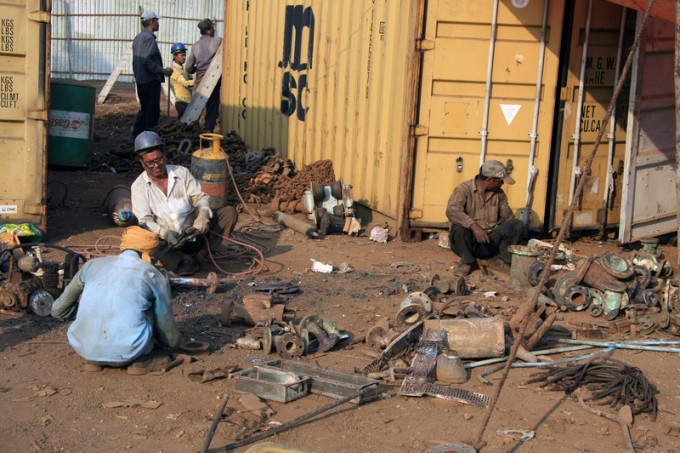 Maersk Line has responded to criticism from an environmental group accusing it of using flags of convenience to bypass EC guidelines on ship scrapping.

The world’s largest container shipping line this year announced it would continue to send vessels earmarked for recycling to the Indian beaches of Alang – long a favoured scrapping destination for shipowners.

However it has come under fire from environmental campaigners claiming the waste management efforts  at Alang are lax, and that it is outside the list of EU-approved ship-scrapping sites – currently comprising “a limited number of yards in China and Turkey”.

Recycling a ship at these yards costs between $1million and $2m more per vessel, Maersk has calculated. And the guidelines only apply to vessels sailing under an EU flag.

John Maggs, senior policy advisor at Seas At Risk and president of the Clean Shipping Coalition, said: “Maersk is a European company and should abide by European laws.

“Suggesting that it might use a flag of convenience to escape EU ship-breaking rules designed to protect the environment and worker safety is scandalous, and will seriously undermine its credibility as a responsible shipowner and operator.”

However, Maersk yesterday told The Loadstar that some scrapping facilities in Alang had raised standards, with four now certified to new standards outlined under the recent Hong Kong Convention.

Maersk Group’s head of group sustainability, Annette Stube, said: “Maersk Group has had a responsible ship recycling policy since 2009 – and we have not lowered our standards or changed our policy following our engagement in Alang.

“Developments in recent years in Alang have seen a number of certified yards capable of recycling to our standards. In our view, it is essential to support this development – and we do that most effectively by bringing our ships to be recycled responsibly in Alang.

“We consider our engagement an opportunity to change the industry for the better,” she said.

The Clean Shipping Coalition argues that Maersk’s decision to go to Alang “undermines not only the company’s position as a responsible industry leader, but also European efforts to improve global conditions”, and added that it represented a reversal on its “progressive policy on ship recycling, including a ‘cradle-to-grave’ approach of ‘total vessel recycling’”.

Sotiris Raptis, shipping officer at Transport & Environment, added: “While Maersk supports innovation in reducing air polluting emissions, this move shows a cavalier attitude towards the environmental impacts of dismantling ships in the intertidal zone. Maersk needs to reverse course on practices that it previously denounced and that would never be allowed in Europe.”

The Clean Shipping Coalition said recent guidelines issued by the EC “make it clear that a beach is not an appropriate place for a high-risk heavy industry involving hazardous waste management”.

Vessels sailing under an EU flag will be legally obliged to use an EU approved facility, but pressure groups have called for shipping companies around the world “with a responsible policy to use EU-approved facilities”.

However, Maersk pointed out that 768 ships were scrapped last year, with 469 – 74% of this total gross tonnage – sold to facilities on beaches in India, Pakistan and Bangladesh.

Ms Stubbe suggested the EC could develop its guidelines with greater reference to current reality.

“The aim of the EU legislation should be to raise the standards where the vast majority of the world fleet is recycled. This is by no means accomplished by the suggested legislation, as it fails to support the development and improvement we have witnessed in Alang” she said.

“We strongly encourage the commission to reconsider its position, as an unfortunate consequence of the suggested legislation is the exclusion of the yards where more than 70% of the world’s fleet is recycled,” she added.