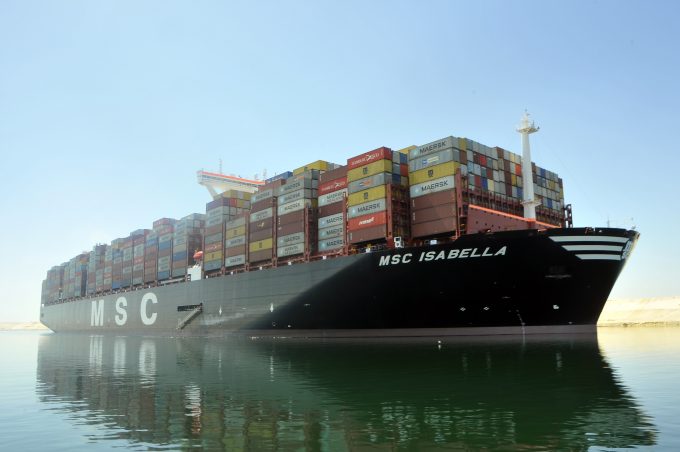 Maersk is to offer its Asia to Felixstowe shippers a feeder alternative via its Suez Canal Container Terminal hub during the temporary suspension of its AE2 service.

According to Alphaliner, Maersk intends to deploy three 2,500-2,800 teu vessels on a weekly AE2 shuttle from the Port Said hub, with the first sailing stemmed for 29 October by the 2,796 teu GH Brickfielder.

The last sailing of the 2M’s AE2/Swan loop before its suspension was on 19 September from Qingdao, the 20,568 teu Maastricht Maersk is scheduled to arrive at Felixstowe on 26 October.

2M partners Maersk and MSC announced the temporary suspension “to match reduced demand” in connection with China’s Golden Week holiday last week. Originally the suspension was due to commence from week 40, but was brought forward a week due to soft bookings.

After a largely absent peak season this year, container spot rates have slumped to below $500 per teu on the route, and The Loadstar understands carriers are considering more blank sailings next month.

According to Alphaliner, the suspension of the AE2/Swan loop is expected to last 10 weeks, resuming on 29 November with the sailing of the world’s largest containership, the 23,656teu MSC Isabella, from Qingdao – “provided that market demand recovers”.The MSC Isabella became the largest box ship to call at the UK when it made its maiden call at Felixstowe this week.

Until the AE2/Swan loop is reactivated, the 2M has added an Antwerp call to the AE10/Silk service, with Felixstowe-bound containers transhipped from the Belgian hub to the UK by feeder.

However, Maersk is obviously minded to offer its UK customers another option to the uncertainty of a feeder option via Antwerp. The Danish carrier will effectively be able to offer continuity with the Port Said dedicated feeders able to provide accurate ETAs and thus secure berthing windows at Felixstowe.

According to The Loadstar’s calculations, the transit time from Port Said to Felixstowe will be approximately 13 days, based on a slow-steaming speed of 10 knots.

UK forwarders have in the past complained bitterly to The Loadstar about delays to their supply chains when their boxes are feedered via Antwerp or Rotterdam.

“In fairness to the carriers, they can’t get guarantees on getting ad-hoc feeders worked at Felixstowe, so often the boxes just wait on the quay over there for the next big ship to bring them across, and that can take a week or more,” said a Felixstowe-based forwarder.

At the time of writing, MSC had yet to respond to a request from The Loadstar about its specific plans to cater for its Swan service Felixstowe customers.