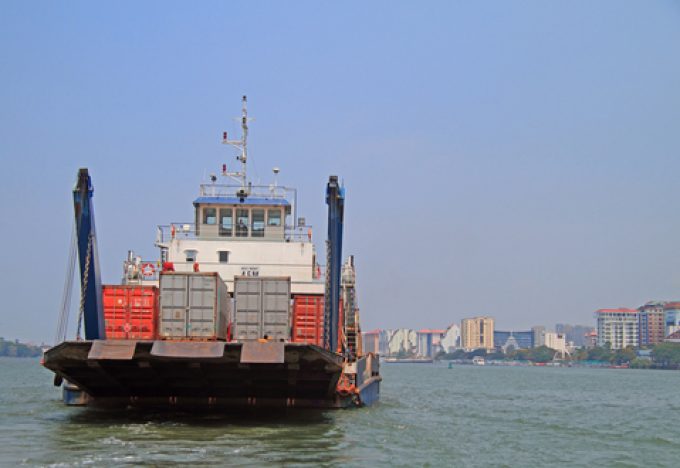 India’s Kolkata Port, recently renamed Syama Prasad Mookerjee, has performed the last of four pilot sailings to move domestic cargo to the north-eastern corridor via Chittagong and Mongla, in Bangladesh, to encourage the use of waterways as an alternative to trucking.

This multimodal arrangement was drawn up under a government-to-government agreement reached in March between Dhaka and New Delhi, advancing the scope of the bilateral “inland water transit and trade protocol”.

The 4 September sailing of the Trans Samudera, loaded with containers for Assam and other north-eastern parts, from Kolkata to Chittagong marked the fourth in that “testing the waters” programme.

“Cargo movement from Kolkata to the north-east through the Indo-Bangladesh Protocol Route will not only reduce transit costs by 25% and time by two to three days, but will also help to develop the economy of that part of India,” said Kolkata port chairman Vinit Kumar.

Under the transit window, backhaul movements from north-east India to Kolkata via Chittagong have also been planned. And Bangladeshi export/import loads would be transhipped on such sailings, enhancing the scalability of this alternative supply chain model for vessel/barge service providers, according to port sources.

Last month, Maersk led a container-on-barge service from Kolkata to Mongla with containers destined for Meghalaya, aided by trucking for the last mile.

The Danish operator said it saw significant growth potential in inland waterways, despite some “natural and infrastructure” challenges. Officials told The Loadstar the waterways between India and Bangladesh were plagued by “geographical and depth shortcomings”, limiting the tonnage capacity of barges.

“The government is working towards overcoming these issues and we should see improvements soon,” said Maersk.

Vikash Agarwal, Maersk MD for South Asia, told The Loadstar: “To start with, exporters and importers must warm to the idea of moving cargo on waterways and make it a regular part of their supply chain. For logistics service providers, the entire ecosystem must exist from a scalability perspective.”

He added: “Rail-linked ports, truck/trailer infrastructure in and around the river ports, year-round navigability, timely maintenance, customs process simplification and so on are the enablers that, along with the demand created with the help of incentives, would make it a compelling proposition to invest in.”

India and Bangladesh have been working at a brisk pace to accelerate coastal shipping co-operation in recent years, as government leaders see a “win-win” situation for both sides, as cross-border trade volumes expand.