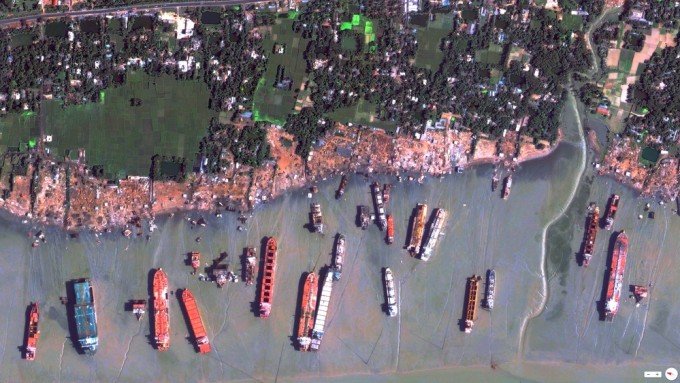 Laid-up containership capacity “remains at an alarmingly high level”, according to the latest review by Alphaliner and, worryingly for shipowners, there are still no signs of demand picking up.

In a survey taken on 4 April, the consultant recorded 325 idle containerships at anchor – equating to 1.48m teu and 7.4% of the global cellular fleet.

According to the Alphaliner data, mothballed tonnage includes 54 vessels of 5,100-7,499 teu, and 55 of 7,500 teu and over, with their operators all desperately seeking employment for them at almost any rate.

Alphaliner said it had seen further “faltering demand” for charter tonnage in the past two weeks – a time of year when demand is normally strong – “dashing hopes of seeing overcapacity decrease in the foreseeable future”.

It is yet more evidence of the market’s severe troubles, it added: “With simply too much capacity afloat, and inadequate demand.”

It follows that it is now an operators’ market, and any fixtures being made are on daily hire rates that barely cover operating costs, with open-ended options and free positioning included.

The nightmare is worst for owners of panamax vessels of 4,000-5,000 teu and the over-panamax sector of ships up to 7,500 teu in size, but Alphaliner reports that the only fixture done in the 7,500-9,500 teu sector in the past fortnight was the charter of the ER Vancouver to MSC for a 12-month period at an all-time low of just $6,500 per day.

A similar sized ship would have commanded four or five times that rate a year ago.

The rock-bottom charter rates are expected to have a further impact on vessel value, eventually obliging owners to take impairment losses and potentially breaching the loan-to-value covenants of mortgages.

The reduced ship values and dire prospects for the panamax sector – particularly once the enlarged Panama Canal opens in June – are forcing owners to reconsider scrapping as an option. The decision to send a ship to the breaker’s yard will have been made somewhat easier for owners by a recent slight increase in scrap prices to around $300 per LDT.

London-based shipbroker Braemar ACM reports that 41 container vessels, totalling 143,000 teu, have been sold for demolition so far this year – compared with the 85 (187,500 teu) scrapped in the whole of 2015 – suggesting that 2016 could be a record year for ship scrapping.

Meanwhile, Alphaliner has noted a new record for the biggest containership ever sold for demolition: claimed to be the 6,479 teu DS Kingdom, which, having been built in 2001 is also one of the youngest ships to have ended its final voyage on a beach in the Indian sub-continent