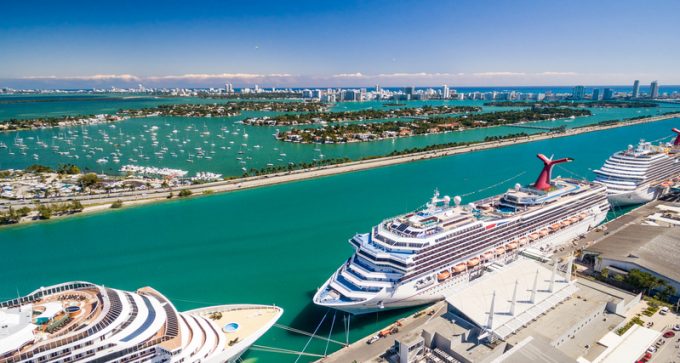 Recently, cruise ships have converged on the Caribbean island of St Vincent, but their passengers are not the customary pleasure-seekers – the vessels were dispatched for the evacuation of locals whose lives are threatened by the eruptions of the La Soufriere volcano.

This was not the restart the cruise lines anticipated, but they are hoping normal business will resume soon.

In the US, the industry has targeted 4 July, reported Maxine Krajniak (pictured below), vice-president cruise lines, marine & hospitality, at Crane Worldwide Logistics.

Some other markets, including Singapore, Italy and Germany, are already back in business; some have been open for a few months, she added.

Ms Krajniak is a veteran of cruise ship logistics, but her role at Crane is recent as she joined the company shortly before the Covid-19 outbreak, and her plans to build up business in this segment almost immediately shifted into low gear.

“The industry was in a coma,” she recalled. But now: “The cruise lines are reporting record sales for 2022. Some are sold out already.”

The ramp-up for this year is already in full swing. Operators are negotiating with ports, talking with suppliers and bringing furloughed crews back. Most employees hail from Asia or South America, so it takes some time to get them into position, especially with restrictions and limited flights.

Many are also headed for different bases, as the industry is repositioning vessels to countries that are more accommodating, such as the UK. This market is going to experience its busiest cruise season to date, Ms Krajniak predicted.

A lot of these sailings, such as Disney Magic’s cruises from Liverpool and Southampton, will be shorter than usual. Two-, three- and four-day trips, known in the industry as “cruises to nowhere”, and shorter regional tours will be popular until confidence has been restored, she said.

Delays in the ramp-up process have been further exacerbated by supply chain challenges. In many cases, operators have to line up new suppliers.

“A lot of the supplier base has been lost due to bankruptcy during the pandemic,” she noted, adding that companies have been working on expanding their supplier bases.

Supply chains revolve around vessels’ itineraries and home ports. The windows to re-supply ships en route and deliver spares for urgent repairs are narrow, as port calls are frequently as short as eight hours. This makes just-in-time capabilities of logistics providers crucial.

The present state of passenger airline schedules, still heavily reduced, makes this more challenging than in normal years, as many of the destinations on a cruise itinerary rely on bellyhold lift to bring in goods.

“The days of ‘next flight out’ are pretty much gone,” she said.

The logistical requirements are varied, given a host of different commodities required. Often described as floating cities, cruise ships need a broad range of supplies, from chlorine for the pool and medical supplies for the hospital to ship spares and food and beverages.

“The largest cruise ships can carry 9,000 people and take on 750 pallets of food. During a seven-day cruise, 80,000 bottles of beer and 20 gallons of cherries in cocktails are consumed,” Ms Krajniak reported.

Perishables are brought in close to the itinerary, but they may have travelled a long way to get there. European cruise passengers have shown a preference for American beef, whereas US passengers prefer Italian food, Ms Krajniak noted.

While there have been efforts to source more supplies regionally, cruise supply chains are still very much global. This makes for attractive warehousing opportunities for logistics providers, she said.

Crane has added a 120,000sq ft warehouse to its footprint in Miami, which will play a major role in the company’s cruise business. Ms Krajniak estimates that 85% of its capacity will serve this sector. Already two suppliers to the industry have moved in, and more are interested, she reported.

However, loads of supplies should be smaller, partly due to shorter sailing times and partly because cruise lines are not planning to sell all their capacity. Part of their plans to cope with a Covid outbreak at sea is to keep inside cabins empty to use as a quarantine area.

Cruise operators have a number of safety protocols already in place, such as hand sanitisers in front of lifts, food lines and cabins (to combat norovirus) for disembarking passengers and disinfecting ships during an outbreak. They have also beefed up some measures, refurbished onboard hospitals and many have appointed safety officers, Ms Krajniak said.

Given the fluid situation with the pandemic, there is still a lot of concern at this point, but forward bookings suggest the cruise industry should rebound strongly once infection numbers come down on a sustained basis.

The chips stay down for carmakers, with no open road in sight

Shareholders in Toyota had little room for cheer last month, as the world’s largest automaker ...