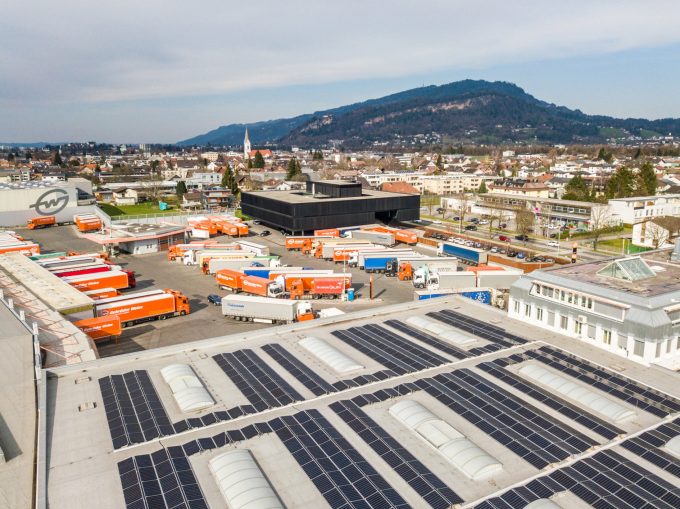 Nuremberg / Esslingen / Aldingen / Lauterach, May 3, 2021. The international logistics company Gebrüder Weiss has built four new photovoltaic systems in southern Germany and Vorarlberg to meets its electricity needs. They have been installed at the logistics terminals in Nuremberg, Esslingen, Aldingen (Germany) and Lauterach (Austria) and together generate around 1,540 megawatt hours (MWh) of solar power per year. This is equivalent to the average annual consumption of around 385 three-person households in Austria during the same period.

“Gebrüder Weiss has set itself the goal of achieving CO2 neutrality by 2030, and equipping our locations with photovoltaic systems to generate solar power is an important step in this direction,” says Wolfram Senger-Weiss, CEO of Gebrüder Weiss. Five more Gebrüder Weiss branches in Austria will be equipped with solar power installations in the second half of the year. This will enable the logistics company to produce a total of 8.4 gigawatt hours (GWh) of electricity at 13 locations by the end of 2021 and save around 1,050 tons of CO2 every year.

The construction of photovoltaic systems is just one pillar in the sustainability strategy of Gebrüder Weiss. The logistics company also has its own wind farm, and is pushing ahead with testing alternative drive technologies for its vehicle fleet. The first hydrogen-powered truck has been part of the vehicle fleet of Gebrüder Weiss since the start of the year, which already includes several gas-powered trucks as well as fully electric motor vehicles.