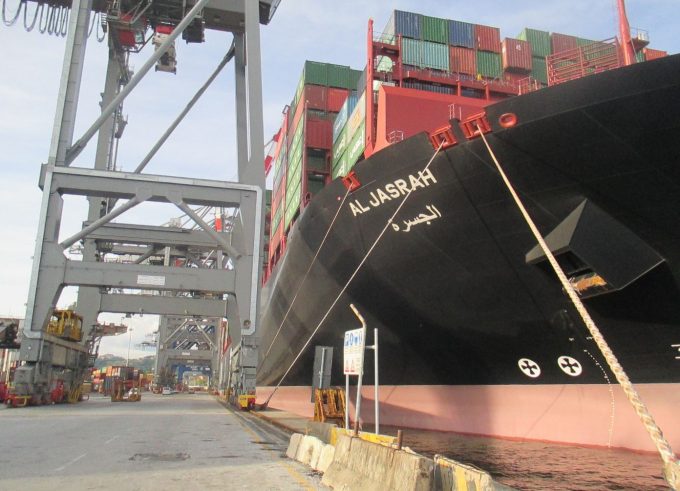 The G6 alliance is to increase its capacity on the Asia-Mediterranean trade by 21%, almost 2,200 teu per week, by early September, which could put downward pressure on freight rates.

HMM will provide six 13,100 teu ships, idled from the suspended G6’s Asia-North Europe Loop 6, and the Loop 4 service, where the South Korean carrier’s tonnage was replaced by partner vessels.

The seventh vessel will come from OOCL, the 13,208 teu OOCL Brussels, after a larger ship takes its place on a North Europe service in early September .

Alphaliner notes that the EUM service will be the sixth dedicated Asia-Med loop on which 13,000-plus teu vessels are now deployed, and marks the point at which the 13,000 teu class has been cascaded from its ‘workhorse’ role on Asia-North Europe to become the new optimum on Asia-Med services.

However, with the vessel upsizing and resulting capacity increases, carriers are taking a big gamble on the Asia-Med trade being robust enough to overcome the boost in supply, without any evidence of a significant increase in demand.

Container spot rates on the route plunged to under $200 per teu in early March, but recovered at a quicker pace than the larger Asia-North Europe trade. On Friday, the Shanghai Containerized Freight Index (SCFI) recorded China-Med container spot rates at $951 per teu, whereas for North European ports, they stood at $932 per teu.

The cascading on the Asia-Med trade is partly due to events on the other side of the Atlantic – mainly the expansion of the Panama Canal which now allows ships of up 14,000 teu to transit. While carriers are not expected to be in any hurry to test its theoretical vessel maximum, there are increasing numbers of 10,000 teu vessels now deployed on all-water Asia-US east coast services (see separate story today).

Alphaliner notes that some of the ships leaving the EUM service, the MOL 10,010 teu vessels, are earmarked for the G6’s newly enhanced Asia-US east coast NYX service, via the Panama Canal, with the first – the MOL Benefactor –arriving at New York’s Global Container Terminals facility this week.