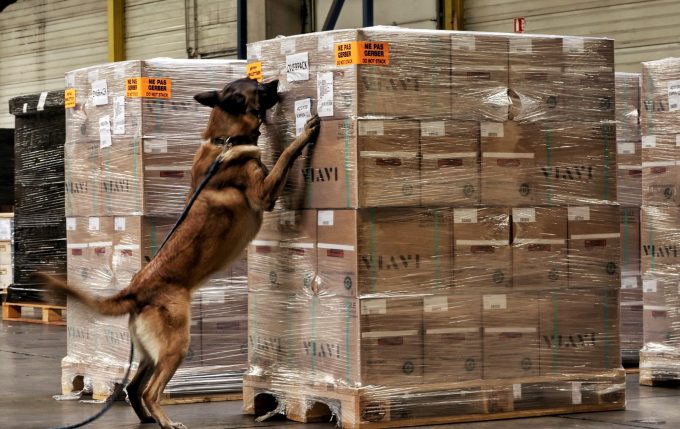 Run by dog-handler Diagnose and Worldwide Flight Services (WFS), the trial addressed shortages in physical checks for undeclared lithium batteries, considered among the biggest threats to flight safety, due to fire risks.

“The drive for this initiative was to offer an enhanced safety option to our airline customers by identifying undeclared lithium shipments before they travel on an aircraft.

“It is not about cutting costs, but mitigating risks,” he added.

He declined to put a figure on the cost of using dogs, but Mr Clark did note that it took approximately five months to select and train them for the task.

He said the training was similar to techniques used to train dogs to find explosives, adding that the animals could also be used to detecting lithium batteries being smuggled on other modes of transport.

He said: “However, the specifics of the environment in which the dog would be used are important in their selection, training and testing.”

The trial involved two dog detection teams at WFS’s Lyon cargo terminal, which were put through their paces on “thousands” of cargo consignments. They found lithium ion and lithium metal phone batteries in units with volumes exceeding three cubic metres,and also detected a single button battery within one cubic metre.

However, while the trial results were positive, there remain regulatory obstacles, particularly in the UK which has a prohibition on using dogs to detect explosives. But WFS is confident this will not prove too big a hurdle as the regulation does not refer to using dogs for lithium detection.

“WFS and Diagnose worked closely with French authorities on the trial and will be happy to share results with other aviation safety and security stakeholders in due course,” said Mr Clark.

“In Europe there is no regulatory framework for lithium detection and, therefore, no regulations or limits. However, as the activity takes place, a regulated environment [cargo warehouses], proper assessment and engagement must take place with all stakeholders.

“This is required to ensure that the process does not adversely impact on any other safety or security requirements,” he explained.

Airport congestion and rising prices push imports beyond the perimeter

Worldwide Flight Services is opening its fourth air cargo terminal at Schiphol, but unlike the ...