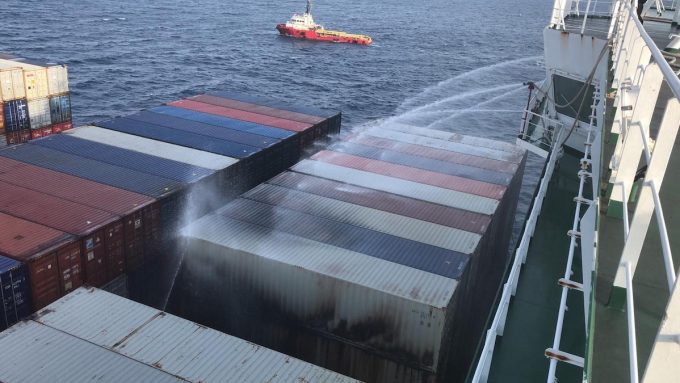 In the early hours of 31 January, off the Vietnamese coast, a fire started in a cargo hold forward of the vessel’s accommodation block.

The ship, in transit from China to Singapore, had to be partly evacuated during the firefighting operations and APL said that there were no reported injuries to crew members.

The CMA CGM subsidiary declared GA on 7 February, instructing salvor Ardent Marine on Lloyd’s open form terms, but details of the average adjustors have not so far been advised.

GA is a principle of maritime law where damages and salvage costs are shared among the cargo in proportion to its value.

London-based marine claims firm WE Cox Claims Group said it expected cargo loss on the APL Vancouver to be “significant” after several days of water being pumped onto the ship and cargo to fight the fire. Unconfirmed reports advise that the ship, which operates on APL’s CIX (China-India Express) service, had around 4,500 containers on board.

APL said today the vessel had been cleared for departure to Singapore following inspections by the salvage team and a classification society surveyor, and that additional safety measures had been provided, including an escort tug for the duration of the voyage.

“The incident on board the vessel has been brought to an end, with swift emergency response by its crew and immediate salvage operations that were activated,” said APL, adding there would be a full investigation to determine the cause of the incident.

Meanwhile, shippers with cargo on the vessel face weeks of uncertainty over the status of their shipments and the details of what GA security will be needed.

Elsewhere, shippers with containers on the 7,500 teu Yantian Express, which caught fire off the Canadian coast on 3 January, are now beginning to discover the status of their cargo.

The vessel, operating on the east coast Loop 5 of THE Alliance Asia-US east coast service, arrived at its nominated safe harbour in Freeport, Bahamas on 4 February.

Hapag-Lloyd declared GA on 25 January and the carrier, along withThe Alliance partners ONE and Yang Ming have advised that there are 198 containers that are “most likely” to be a total loss to fire damage and a further 460 that were stacked in the vicinity of the fire will require inspection.

It is the intention to discharge potentially salvageable containers this week when surveyors for the cargo interests will invited to inspect their contents. Cargo interests for containers that survived the fire will be required to provide GA security and a separate salvage security before the boxes are released, and are also likely have to pay the cost of relay to the final destination.

Of the expected total-loss containers, ONE has the highest number, 99, followed by Hapag-Lloyd with 68 and Yang Ming with 31.

It is estimated that less than 50% of cargo in containers shipped globally are insured.