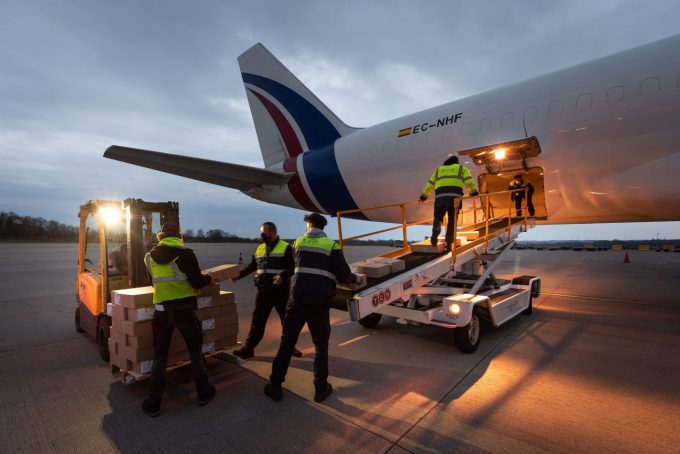 Airlines are switching European airports as severe staff shortages keep freighters on the ground for hours, while others are having to fly before they are fully loaded.

German and Belgian airports were said to be among the worst affected according to carriers – who spoke to The Loadstar anonymously, fearing “vindictive” handlers would drop them altogether.

One carrier, which said it had faced losing about one-third of its capacity in recent weeks because of the shortage of handlers, said airports and handlers would get “little sympathy from cargo operators”.

“They have been making hay from cargo, but have now ditched us for passengers, which feels a bit short-term. And you would have thought that the Germans would have it sorted – but even they haven’t.”

Egyptair Cargo said this week it would switch operations from Cologne-Bonn (CGN), which has one major handler, to Ostend-Bruges until further notice, and other carriers have also re-routed to try to avoid the ‘worst’ airports.

Carriers said some airports were only deploying two or three staff for a whole aircraft, with delays on the ground of up to eight hours. Another said the delays were costing it thousands of dollars per flight.

“We have had a real struggle getting our flights away inside a window that would allow the aircraft to return to base for its next flight. It’s absolute bullshit. We have not been giving our customers the service they deserve because of delays and freight left behind.”

The source added that carriers were unable to complain for fear of reprisals.

A carrier source at a German airport explained that there was a perfect storm for labour shortages.

“Many airports have laid-off the (unskilled) interim workers, who are now reluctant to come back for physically challenging and low-paid jobs.

“In Germany, we have the system of “kurzarbeit”, which is short-term work, where employees are sent on leave while most of their salary is paid by the government.

“Now that the flights are coming back, there is a lack of skilled workers as this technical unemployment cannot be reversed at short notice. And of course, it is holiday period and people are eager to get a suntan at the Italian or Spanish rivieras.”

While some airports are said to be looking at incentives to bring in more labour, most downplayed the issues.

Amsterdam Schiphol, cited as problematic by one carrier, would only say: “Amsterdam Schiphol is committed to cargo, and we have just reorganised our team to ensure we continue to give cargo customers the best support possible. As an airport we are finding the best way to support all customers as we rise to these challenging times, and we will work together to achieve this.”

A spokesperson for CGN was more instructive. “The situation at the airport remains exceptional. The effects of the coronavirus pandemic on airport operations are evident – whether at check-in or in aircraft handling.

“The high demand for travel has also led to a sharp increase in passenger traffic, which is often difficult to forecast due to short-term flight scheduling and which reaches pre-crisis levels at peak times.

“Unfortunately, this means that it is not always possible to avoid delays in operations during particularly busy periods. The airport has already taken numerous measures to optimise operations and to significantly improve staff deployment.”

Carriers also pointed to difficulties at Liege Airport, which prides itself on being cargo-focused. VP commercial Steven Verhasselt said the airport was seeing record volumes each month – 40% more volumes, year on year in the first half of 2021.

“That growth is obviously a challenge for the handlers, but they are coping and there are hardly any employment issues in LGG. There is no pile-up for export cargo. The warehouses are busy, but not extremely full.

“One of our customers has indeed diverted some of its capacity to other airports, while still keeping LGG as one of its main hubs in Europe. We sure hope that is only temporary, and will continue to work on improving and delivering.

“The discussion between airlines and handlers, concerning late cargo deliveries versus delivered cargo missing a flight, is not new. It happens, as it happens in other airports, but there is no structural issue.”

Noting that growth would continue, with Cainiao starting operations in September, he added: “All handlers will keep looking for more talent, and we will keep supporting them.”

One of the biggest bugbears for all stakeholders is the continued use of passenger-freighter aircraft. One carrier source said: “I heard that Frankfurt has similar problems, even more so as the hilarious ‘preighters’ with cabin loads need a dozen workers to unload.

“Airports are now reluctant to accept these aircraft as they say they haven’t got the manpower to fit this in their schedule.“

He added that handlers at Brussels Airport (BRU) were refusing to receive additional ‘preighter’ flights. However, a spokesperson for BRU said some 40% of its all-cargo flights were passenger-freighters, many devoted to vaccine transport.

The spokesperson added BRU had seen 47% growth since 2019, and added: “The growth in volumes has been absorbed by the cargo handling agents and like most other European airports this upscaling of the cargo operations requires additional manpower. So far this has happened without major disruptions in operations.”

However, the spokesperson acknowledged that it was possible that a specific charter request had been turned down if it was “in the middle of an operational peak” and required “a lot more manpower than for a typical freighters”.

Fraport, meanwhile, noted that passenger traffic had risen significantly over the past few weeks, while “cargo continues to grow unabated”, and added that ‘preighters’ required “a lot of staff”.

“In addition, airlines currently also operate very flexible schedules, with changes frequently made at short notice. The cargo sector, in particular, has seen a rise in ad-hoc charter services. As a result of these structural changes, traffic tends to be heavily concentrated during several peak times of the day and on the weekends.

“A large quantity of staff is required to deal with these sudden sharp increases in demand – making it sometimes difficult to ensure on-time operations.”

As a result, Fraport has begun to cut or suspend short-time work for ground staff, while its handling arm is currently hiring.

“The situation is still very dynamic. The crisis is not over yet. Hence, flight schedules will be dynamic, too. So we will have to adjust and react flexibly.”

WFS, which has cargo operations in Brussels and Liege, said it had not experienced any difficulties, but would be recruiting staff in the coming months to help it manage traffic fluctuations.

UPDATED 6.8.21 TO INCLUDE AMSTERDAM SCHIPHOL STATEMENT