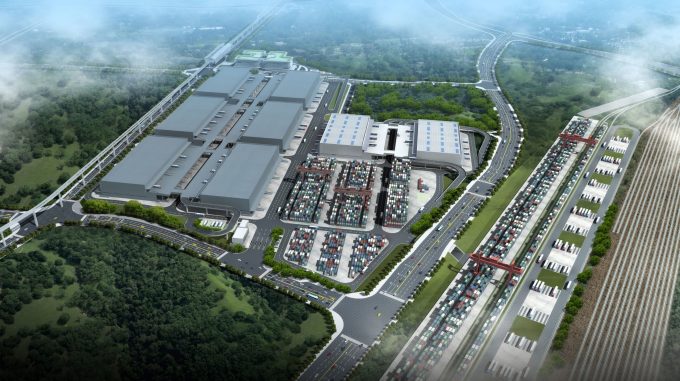 Singapore’s PSA International and Germany’s inland port of Duisburg are to set up a joint-venture company to invest in multimodal terminals serving the Asia-Europe container rail freight trades.

Multimodal Investments (MIPL) will be headquartered in Singapore.

As part of the JV agreement, duisport, the operating name for the port of Duisburg, has taken a stake in PSA’s multimodal investments in China – Sino Singapore Chongqing DC Multimodal Logistics in Chongqing (pictured above) and the China United International Rail Co rail terminal network, which comprises 13 facilities across the country.

PSA International CEO Tan Chong Meng said: “This is a ground-breaking opportunity to collaborate more strongly with global customers seeking direct access to both land-locked and maritime markets in Asia.

“We look forward to working with supply chain service providers to develop more physical and digital solutions for product redistribution and returns, enhancing the overall supply chain resilience between inland and sea terminals.”

Erich Staake, CEO of duisport, added: “Our joint-venture strengthens our market position in Asia and deepens our ties with one of the fastest-growing regions in the global economy. Our participation in this network opens new opportunities for European companies, in particular in markets previously closed to them.

“The combination of efficient rail infrastructure and innovative digital services associated with the joint venture is, in my opinion, unprecedented anywhere in the world,” he said.

The news comes as forwarders and rail freight operators continue to report strong demand on the Chain-Europe rail routes, thanks to container shortages and staggeringly high Asia-Europe ocean freight rates.

A number of forwarders have told The Loadstar China-Europe ocean freight rates are now higher than the rail freight equivalent, despite the fact that transit times are double.

Samskip Logistics business development manager Rachelle Slingerland said that, depending on pre-carriage, it could now be cheaper to ship freight by rail than by sea – on a spot basis, with surcharges in China included. She said Samskip was paying $6 less per tonne for an overland move from Wuhan to North Europe.

And shippers’ ocean freight woes have been compounded by the shortage of empty containers.

“Just last week, I asked a well-known all-water operator about a shipment to Shanghai,” she said. “I was told I’d have to wait two weeks for the first available container, and another two weeks for the second.”

She added that a recent traffic surge of 10-15% in loads moving overland between China and Europe “highlights the growing appeal of established silk road rail services over their deep sea counterparts”.

She said: “These routes are attractive for higher-value products, including electric bicycles, laptops, smartphones and other electrical goods, and clothing westbound, with eastbound moves for cars, alcohol and furniture. Temperature-controlled loads move more efficiently both ways.

“There’s an additional benefit for companies doing business between the UK and China following Brexit, where all customs formalities come under the responsibility of a single organisation,” she said.

Development of the California Inland Ports (CIP) project could offer a solution to logistics challenges ...

War in Ukraine and sanctions on Russia could have far-reaching consequences for China-Europe rail freight. Ukrainian ...