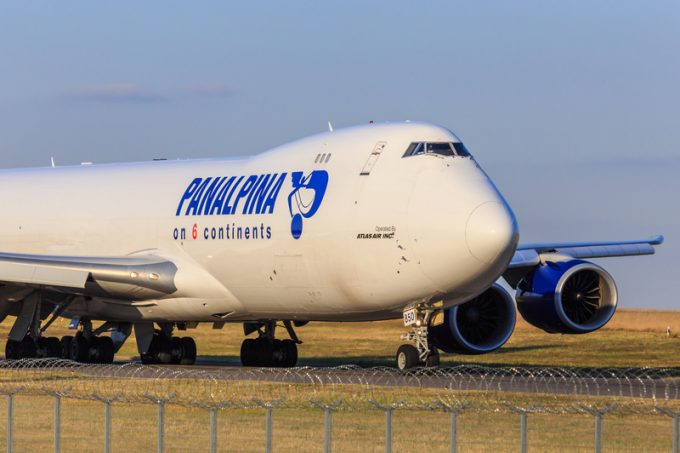 DSV Panalpina is to end its contract with Atlas Air for the wet-leased 747-8F freighter in July, according to multiple sources.

The aircraft touched down this morning in Luxembourg for the first time in three months, but without its Panalpina livery, and took off again just three hours later, according to flight tracking websites.

Atlas signed a five year-contract with Panalpina in 2015.

Atlas Air declined to comment, but DSV Panalpina said: “We will continue to operate Panalpina’s air charter network, which has proven to be a strong value proposition to our customers. We actually have plans to reinforce and expand the network. We will release more information about this soon.”

The spokesperson did not mention the Atlas freighter, however, and in March the forwarder’s key charter network executives, Lucas Kuehner and Matthias Frey, were let go, along with head of perishables Colin Wells.

Sources have suggested that DSV Panalpina would look to create its ‘air charter network’ out of blocked space agreements rather than wet leases, with Qatar Airways a likely supplier.

The Atlas/Panalpina freighter had a hub in Luxembourg, and local union OGBL noted on its website last week that 88 DSV Panalpina jobs would be shed at the airport.

OGBL said that, “after several weeks of negotiations, a social plan was signed on 29 May”.

DSV Panalpina employs 148 people at the cargo centre at Luxembourg airport. In February, it enacted a job retention plan which allowed for early retirements, voluntary departures and re-employment assistance.

OGBL said it was a “deep shock”, and added: “The introduction of a new digital management system will leave most of the staff unemployed from 1 July. The OGBL strongly denounces DSV’s decision to maintain this implementation date, despite the health crisis of Covid-19.”

The number of planned redundancies has been reduced from 101 to 88 and OGBL also won “a moral commitment” in writing to “want to keep the DSV Panalpina structure active in Luxembourg”.

Since February, the 747-8F Spirit of Panalpina has not operated in Europe at all, instead offering flights between Huntsville and Shanghai, as well as Incheon and Anchorage, with the odd connection to South America. But it spent over month in Hong Kong, from 20 April to 23 May, which is likely to be when it was repainted.

Panalpina has had a freighter fleet for 30 years, even in tough times. Its 2012 contract with Atlas for two aircraft was negotiated shortly before the market became characterised by overcapacity, which Panalpina acknowledged was a “challenge”. It cut back to one freighter in its 2015 contract.

You can read more on this story on Premium, here.

Market Insight: As DSV loses APAC sales VP, only one ex-Panalpina exec is left to bet on now

Frantic, entertaining and spiritual – what a week we just had. The back and forth in ...

On the wires: DSV Panalpina – Here comes the smile-shaped recovery

”The quarter has developed better than we anticipated when the Covid-19 crisis started. This illustrates ...

Against the odds: Whither the monoliths? Spare a thought for the Big Four

(This is Mr Joy’s first column for Premium. A transport and logistics veteran with some ...

Against the odds: CH Robinson, UPS & DSV – It gets really exciting from here

In what is effectively a continuous search for value in the transport and logistics vacuum, ...

Images of the Panalpina sign being removed from its Basel headquarters last week triggered an ...

Boeing has won its case against Volga-Dnepr, and is allowed to sell the four freighters ...

Against the odds: The Spirit decision makes DSV sexy? Hardly

The spirit of Panalpina is gone. Both the aircraft, and the spirit. But, to paraphrase ...