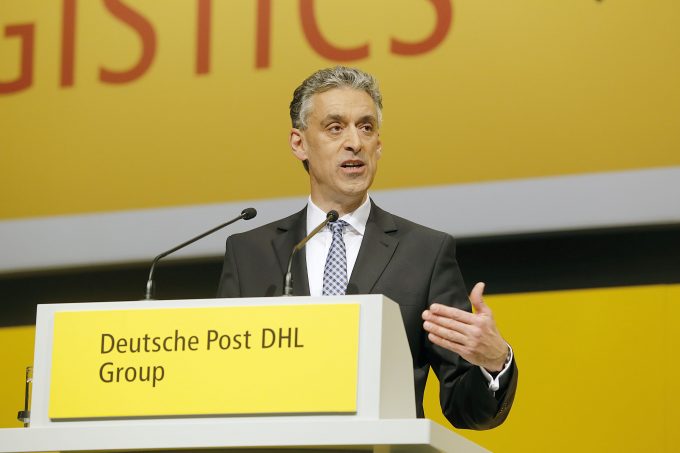 Deutsche Post-DHL chief executive Frank Appel has issued a thinly veiled warning to competitors that it will be looking to use a predicted downturn in trading volumes to win market share.

Speaking at the company’s third-quarter results in Bonn today, which saw third-quarter group revenue hit €24bn and EBIT reach €2bn, Mr Appel was repeatedly asked about the outlook for volumes over the next few quarters.

“Crises are moments where strong players take advantage, and we’ll be stronger than competitors going forward,” he told analysts.

For an in-depth insight into DP-DHL’s third-quarter numbers and what is coming next quarter, check out Loadstar Premium.

Notwithstanding the growing evidence of a prolonged downturn in DP-DHL’s Global Forwarding, Freight division saw another significant jump in EBIT and revenue and continued as the group’s largest division by revenue.

It ended the third quarter with a 57% year-on-year EBIT growth to €584m, due to continued strong revenues, which increased 38.2% to €7.9bn largely as a result of “the continued high freight rates”.

“We registered a 10.9% decline in air freight volumes in the third quarter of 2022, primarily on trade routes between China and the United States, due to lower demand and a shift to ocean freight.

“At the same time, freight rates remained at a high level, resulting in revenue from air freight exceeding the prior-year figure by 22.6%.

“[Air freight] gross profit improved by 54.6% due to ongoing strong demand for charter flights, amongst other factors,” explained the company in its results report.

In ocean freight, Deutsche Post’s acquisition of JF Hillebrand bolstered what would have been far weaker volumes.

“In the third quarter of 2022, ocean freight volumes were up 11.9% year-on-year. Excluding the acquisition of Hillebrand, this figure was 8.9% below the prior-year level, due primarily to a decline on trade routes from China.

“The capacity situation on the ocean freight market eased. Overall, freight rates remained at a high level even though the expected normalisation has begun,” the company said.

It added that third-quarter 2022 ocean freight revenues were up 67.2% year-on-year, while excluding Hillebrand that increase was 40.4%.

Gross profit improved by 43% in the quarter, while the EBIT margin grew to 7.4%, over 6.5% in the same period last year.

“The development was especially pronounced in the Americas region,” it commented. “E-fulfilment solutions in particular saw growing interest here.

“All sectors exhibited double-digit growth rates, with Consumer and Automobility recording the most significant growth.

“Revenue growth is furthermore based on new business and contract renewals as well as e-Fulfilment and omnichannel solutions, amongst other things,” it added.

It won new contracts worth €385m in annualised revenue from both new and existing customers, during the quarter, corresponding to a total contract volume of €1.8bn.