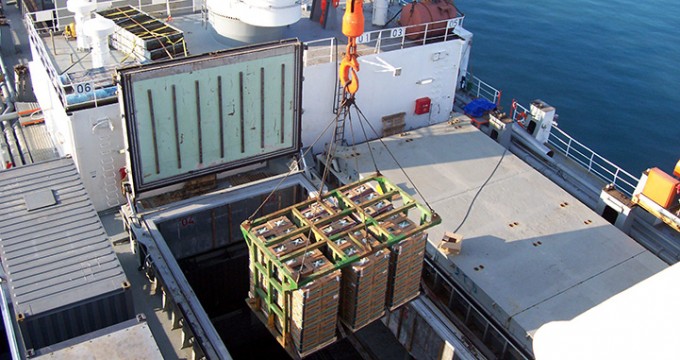 The “madness” of ex-Asia container rates is driving more un-boxing of containerised cargo.

And the resulting bounceback for breakbulk is providing a boon for secondary ports and shortsea shipping, according to chartering specialist Ahlers.

“Alongside some bigger MPVs being chartered for carrying containers, there is an increase in cargo volumes due to more containerised cargo coming back to the breakbulk market, as well as machinery and special equipment which was moving as breakbulk on container vessels.”

Last week, The Loadstar reported how forwarders were increasingly looking to multipurpose vessels to circumnavigate the laundry-list of delays and costs disrupting Asia-Europe container trades – in some cases ditching boxes in favour of breakbulk.

And the de-containerisation trend appears to be gathering steam on intra-Asia lanes, too, where commodity shippers – used to rock-bottom freight rates – have been suddenly left facing a bill significantly higher than in previous years.

Chartering manager Senthil Nayagam told The Loadstar: “Cargo such as sawn timber and plywood is shifting towards breakbulk general cargo vessels due to the big shortage of containers, high freight rates and container rollovers.”

For example, he said, the cost of shipping plywood ex-Malaysia to Colombo had increased from $400 to $1,025 per teu, “so traders are looking to ship in breakbulk for the next three to four months, until the situation improves”.

Another example is cargo shipped ex-China to Russia. Mr Nayagam said Ahlers’ original plan of either sailing direct to St Petersburg or using an ocean-rail service had to be scrapped in favour of using alternative ports and shortsea connections.

“Freight forwarders are forced to look for unconventional options, such as moving cargo to trimodal container terminals and then desperately trying to find different shortsea solutions with smaller coastal vessels, and trucking the cargo to its final destination,” he added.

For many industries, the shipping cost is not the only consideration when deciding on a mode shift.

“Inventory costs, potential penalties related to late deliveries and the urgent need for raw materials to keep the factories operational are all factors,” said Mr Nayagam. “Summer fashion will need to be in the stores in time for the summer season, for example.

“We believe the container market situation will normalise again, but at the moment it is uncertain when that will happen. In the meantime, we will continue to see more and more ‘traditional container’ cargo moving to alternative modes of transport, including breakbulk.”