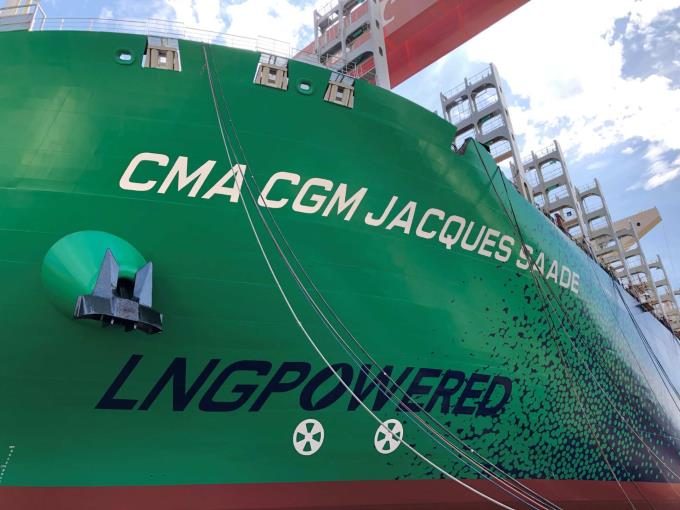 The 23,000 teu CMA CGM Jaques Saade is the first in a series of nine vessels that will run on what is considered to be the most environmentally friendly fuel.

It is named in honour of CMA CGM founder Jacques Saade, who died last year.

At the launching ceremony today, Rodolphe Saadé, chairman and chief executive of the CMA CGM group, said: “With the launching of the first 23,000 teu ship powered by liquified natural gas, we demonstrate that energy transition can be effectively successful in our industry if all the players work together.

“It paves the way to a global shipping approach where economic growth and competitiveness can coexist with sustainability and the fight against climate change.”

The vessel is set to enter formal service next year on the Ocean Alliance’s Asia-North Europe services.

The vessel has also been fitted with a smart system to manage ventilation for reefer containers stowed in the hold and the company said it had made a variety of other design alterations to improve performance.

“To further improve the environmental performance of the CMA CGM Jacques Saade and her sister ships, their hull forms have been hydrodynamically optimised. The bulb has been seamlessly integrated into the hull profile and the bow is straight. The propeller and rudder blade have also been improved, along with the Becker twisted fin,” it said.

Industry analyst Alphaliner said the delivery of the vessel iand orders for other LNG-powered units meant “the carrier has clearly taken the lead when it comes to the commitment to natural gas as alternative fuel for container vessels”.

Alongside the remaining eight 23,000 teu units under construction, it has five LNG-powered 15,000 teu vessels due for delivery in 2021 and 2022 and six LNG-powered 1,380 teu ships, three of which are already in service, for its intra-Europe regional subsidiary, Containerships.