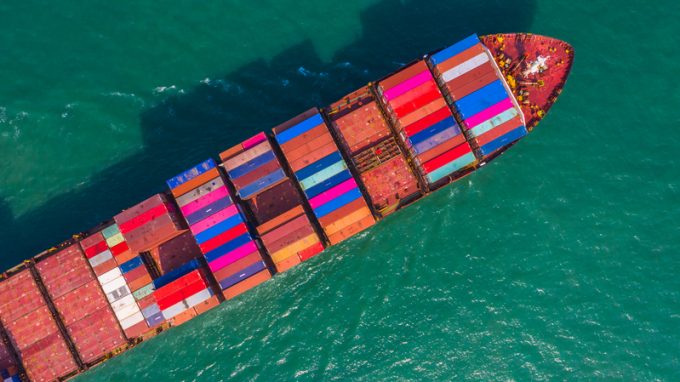 As Shanghai enters the fourth week of its zero-tolerance Covid lockdown, forward export bookings are said to be down by 40% or more, prompting carriers to consolidate loads and blank more sailings.

According to one carrier contact, lines may be obliged to implement a “hardcore” blanking strategy to mitigate the impact of the cargo shortfall.

The source said many of the numerous containerships currently at anchor off Shanghai port are “simply waiting for new orders” as fleet managers struggle to agree with alliance partners on contingency plans.

“I’ve seen lots of data showing a very heavily congested anchorage area, but many of these ships are not waiting for berths, but for cargo or rotation changes,” he said.

“The last forecasts I saw were showing booking cancellations of at least 40% for our May sailings from China to North Europe, but the situation seems to be a bit better for the transpac loaders, for some reason,” he said.

Meanwhile, Hapag-Lloyd said today the average berth wait times, at Shanghai’s WGQ terminal for example, was one to two days, adding that terminal operations were “normal”.

According to an updated graph supplied to The Loadstar by VesselsValue, although there is evidence of a spike in berth waiting times for containerships this month at Shanghai, delays are still less than two days. 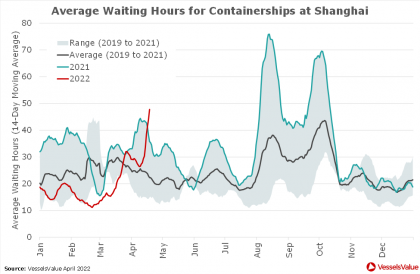 Hapag-Lloyd attributed some of the operational challenges at the world’s largest container port to a scarcity of haulage, advising that “the daily trucking in ratio has been reduced by around 45%”. And the main reason behind that was “a significant reduction of cross-province trucks”.

“Local trucking within Shanghai is normal, however cross-province trucking to and from Jiangsu is operating with a very strict road control that is leading to road congestion,” said the carrier.

Under the strict Covid measures, truck drivers are required to have an epidemic prevention pass (EPP) before they can drive in Shanghai. The pass is granted on production of a negative PCR test, taken within the preceding 48 hours.

Notwithstanding the continued closure of manufacturing plants and warehouses, carriers report that many empty container depots in Shanghai are shut for the release of equipment.

Carrier fleet managers must decide whether to sail their ships light, combine the reduced export loads onto fewer sailings, idle the ships until more cargo is received on the quay, or cancel the voyage altogether.

The 2M for example appears to be taking the latter course and adopting a blanking strategy while demand is reduced.

Maersk said the void sailings were part of “an effort to adjust network deployment across the market”.