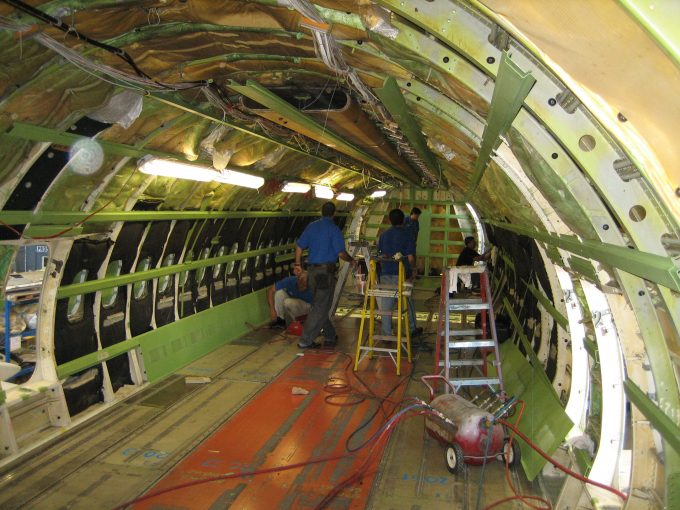 The company recently revealed it delayed test flights of the first 777 freighter off its conversion line until next year, and some observers now reckon it could be February before the aircraft takes off.

IAI is not the only aerospace company behind schedule with its conversion programme. Elbe Flugzeugwerke, the joint-venture of Airbus and ST Aerospace for Airbus passenger-to-freighter conversions, revealed in October it would miss its target of turning 12 A330s into all-cargo configuration this year and would be struggling to complete more than eight.

The situation is not much better in new aircraft productions: after turning out 51 planes in September, Boeing managed only 35 in October, and with 122 new orders signed that month, the backlog continued to grow.

Airbus delivered 68 commercial aircraft in November, but this was not enough to keep the company on track to meet its 2022 target. A few days ago it officially acknowledged it would not be able to achieve “around 700” deliveries this year, after all.

The aerospace industry has become a poster child for broken supply chains under the long shadow of Covid. Aircraft production and conversions have been hobbled by shortages of labour and parts from raw materials and rivets to microchips and engines.

And the problem is not confined to any specific sector or geography, nor to size of suppliers, as Airbus CEO Guillaume Faury stressed at the end of November.

The meltdown started during the pandemic, which severely disrupted aerospace supply chains. Built on the just-in-time concept, they were not able to cope with problems of quarantines, disrupted schedules, large-scale flight cancellations and travel restrictions. While those issues have largely disappeared, parts shortages and lengthy delays remain chronic and the repercussions of the war in Ukraine and continuing lockdowns in China have exacerbated the problems, Mr Faury said.

And his outlook on a return to normal is bleak. He said: “We believe we will be operating in this supply constraint environment for at least a year.”

Other industry executives are citing wait times of ten or 11 months for certain parts and, with more than 10,000 parts used in a conversion of an aircraft, this opens a veritable Pandora’s box of potential for bottlenecks and disruption.

Finding alternative suppliers is challenging and time-consuming, as every part that goes into an aircraft has to be from a certified supplier, and the certification process is painstakingly lengthy.

Suppliers are feeling the heat as well. According to a Reuters report last month, some have warned they are facing cash flow problems as they sit on growing mountains of inventory while plane-makers’ production lines only inch forward.

Mammoth Freighters, which turns 777s into all-cargo configuration, has managed to avoid serious delays so far, according to Brian McCarthy, VP of sales and marketing. Early in the pandemic the company decided to shorten its supply chain and source most of its materials and supplies in North America.

Mr McCarthy stressed, though, that “we are by no means eliminating global sourcing and suppliers, but we are playing it safe for now in the name of time and distance”.

The second key plank in the company’s strategy is to get parts well ahead of time, which carries some risk. He explained” “Lead times are long and we have to make a substantial investment in rather large mill runs as well as other advanced orders for parts, materials and services even though we run the risk of having a design or regulatory-induced product change, but it is a decision we have made to stay on schedule.

“We are in a market where you must secure the source and/or services and then proceed swiftly through the process of ordering, issuing POs and funding purchase orders. Otherwise, you can get left behind or moved to the back of the line quickly.”

He suggested references to Covid may, in some cases, be a convenient smokescreen to hide other problems.

“Right now, the most convenient excuse that can be presented to the market is ‘Covid-induced’ supply chain issues. That’s probably only part of the story, but it’s a pretty good excuse that nobody’s going to question,” he said.