News / As it 'awakes', is Delta Airlines, with a new cargo chief, finally getting it right? 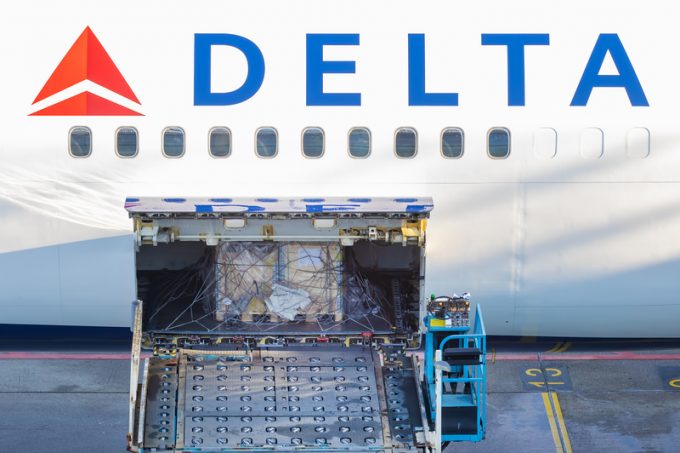 Delta Airlines last year achieved the unenviable distinction of being one of the very few major carriers to see cargo revenues plummet – despite a global average rise in air freight rates of a whopping 75%.

For the first three quarters, cargo revenue dropped, year on year, by between 21% and 42%. It was only by the fourth quarter that the airline turned the corner, with revenues finally growing on 2019 by 10%.

And Delta was not alone: rival American Airlines faced similar falls, and the reason was similar – cash burn.

“On 20 March the world changed,” Rob Walpole, vice president cargo for Delta, tells The Loadstar. “We had a clear strategy: to put the airline to sleep, as quickly as we could. We instigated a ‘shrink the business’ effort.

“And of the US airlines, we were as good as any of the others; we brought costs right down, including in cargo.”

Delta did indeed make sweeping cuts: in the second quarter, it cut total system capacity by 85%; expenses shrank some 50%; it parked 650 aircraft; and 37,000 staff took short-term unpaid leave. By the end of the year its average daily cash burn was down to $12m, 90% lower than at the end of March.

“Remaining agile and disciplined with our cost structure will be key to our success,” said Gary Chase, Delta’s interim co-chief financial officer.

Delta insisted that it was quick off the mark in cargo – but it just didn’t quite continue. It claims to be the first US carrier to fly cargo-only flights. But, acknowledges Mr Walpole: “We didn’t scale cargo-only to the scale of our competitors. And there were a couple of reasons for that – cost and cash assessment. We had an aggressive fleet reduction strategy, and retired all our 777s.”

The 18-strong fleet of aircraft – widely said to be the best aircraft type for cargo-only operations – saw its last 777 parked in October, as the airline decided to focus instead on its fleet of A350s, which it said would result in a 21% cut in fuel burn on some routes. It also accelerated the retirement of its 767-300 fleet, with seven going in the second quarter.

Like many airlines, Delta talked to suppliers to renegotiate, but Mr Walpole says: “We didn’t ask for the same service at a lower cost; we reduced services and scale.” He adds that in some airports, such as Chicago, cargo-only operations in fact needed a lot of resources. “Our relationship with vendors became transactional rather than fixed.

“We were very focused on cost reduction and long-term cash,” he adds. “It was a deliberate strategy.”

But, with the benefit of hindsight, would it have been better to keep flying, given how profitable cargo was – particularly in the second quarter?

“Maybe we could have tried to fly more,” concedes Mr Walpole. “But I don’t think we could have changed much in the second half. With the strategy we put in place last year, and for this year, I am pretty happy with where we are.”

The sudden hibernation of the airline led to the closure of cargo stations and “a reduced organisation in cargo” by more than 20%. Much the same amount as its decline in revenues, in fact.

“But we will rebuild as volumes come back – but with a new structure,” says Mr Walpole. “We’ve set up a cargo-led strategy.

“In Q4, and Q1 21, we have looked at markets where we envisage passenger flights in future. We are starting with cargo and then rolling passengers in. The business is focused on lane profitability.”

At the end of the year, for example, it launched Atlanta-Rome. “It’s a market we can make cash-positive on a cargo-only basis, and then bring in passengers. It’s worked well. Detroit-Nagoya is also good, and focused on the automotive markets. That flight has been running since February and we are building a passenger load.

“It’s been a very deliberate, laser-like strategy. Cargo is now part of the conversation, heavily so.”

Did the slow turnaround in cargo affect customer relations? Sources have suggested that large forwarders are punishing airlines which let them down last year by negotiating aggressively this year.

Delta did put on one-off flights for certain customers in the first half, and “closely engaged” with them. In fact, like other airlines, Delta says its relationship with customers somehow got closer.

“Logistics companies started talking to us to piece together their network needs. Forwarders were cobbling their supply chains together, and we were all having detailed discussions with customers, and putting solutions together.”

This new focus on solutions, rather than price and service, “could change relations in the near to mid-term,” believes Mr Walpole. “We are still in the pandemic, but there are a whole load of other factors affecting our customer needs.

“The rise of e-commerce has changed some discussions. We are more solutions-driven and less procurement-driven.”

The pandemic has also altered the carrier’s relations with partners: Delta has strong cargo relationships with partner carriers, both as part of SkyTeam Cargo and as a 49% shareholder in Virgin Atlantic. Mr Walpole points specifically to SkyTeam’s Korean Air – one of the Asian airlines to come out of 2020 with an overall profit.

“Our partnerships are closer as we look at rebuilding the network. We are having more nuanced discussions. How can we work more closely together, how do we create a strategy that is built much more specifically on how we can leverage to extend our networks? We see partnerships as a competitive advantage for us.”

One of Delta’s new focuses, however, is on its domestic network. Its e-commerce product, Dash, makes up 40% of its US business.

“We have the most dense domestic network. Our point-to-point network is able to provide a good start point, but you also need things like parcel handling capabilities and last-mile extensions. We can do this ourselves or via partners, and can provide a full e-commerce service for our customers.”

He says Delta Dash is seeing demand for its service in automotive, spare parts replenishment, pharmaceutical and healthcare business.

“We are not Amazon, but our network can provide value where others can’t.”

Delta’s Dash product should account for 50% of its domestic business by the end of the year, says Mr Walpole – but the carrier declined to break down what percentage of overall business that is.

It has also retained its focus on digitisation, introducing APIs last year and “extending that into a broader footprint” he says. “APIs are not rocket science, but we think we are ahead of the game.” But he adds that “there is a lot more to do”.

One of the main charges against Delta over the past few years has been frequent change in cargo management, as well as internal structural changes. As one observer noted: “Delta changes cargo management like most people change their undies.”

Mr Walpole himself joined the carrier in September 2019 in the newly created role of vice president cargo operations and logistics. Just over a year later, he was called upon to replace vice president cargo Shawn Cole as the cargo arm was subsumed into the commercial arm, in yet another Delta shake-up.

“We’ve taken some fairly aggressive strides. There has been lots of focus and support from the company, and we’ve been given room to make changes.”

Mr Walpole explains that the repositioning – which has in the past made Delta look, at best, uncertain about what it should do with its cargo department – this time has benefits.

“There is a recognition about what we need to do to be successful in cargo, and it may require different skills from the past,” says Mr Walpole, carefully. “There is now a clear view that the right people are in the right seats.”

He cites the recent growth in Delta’s cargo business as evidence.

“We are leading the pack in terms of our dollar and capacity position, and the trends look good. We’ve got some nice tailwinds and lots of opportunity. On digitisation, we are as good as anyone in the business.” And he’s looking forward to the full roll-out of the A350 fleet.

Delta is Mr Walpole’s first airline job. He had a short stint as COO of port company DP World’s global logistics and supply chain and, prior to that, was at DB Schenker for more than 10 years, latterly as CEO of its US business.

It’s been a tough time to enter the airline industry – how has he found it?

“There were no real surprises, as airlines are part of the supply chain ecosystem, so I was familiar with it. But it is a more complex business to run than I’d appreciated, airlines have a lot of complexity. The way an organisation is tied together to run the business is important.

“But what also struck me at Delta was the strength of the culture. Not only the way the company has navigated through the past 12 months, and made a lot of sharp and good moves, but also the way people have reacted. Nearly 40,000 people taking voluntary leave is really impressive. The Delta culture is stronger than you may have realised.”

And its cargo department appears to be strengthening. The first quarter of this year saw Delta’s cargo revenues gain 12% on 2019’s results. It is operating scheduled cargo-only flights, to Brussels and Madrid from New York.

Pre-Covid, Delta’s cargo revenues were less than 2% of overall turnover – which perhaps explains its often-confused cargo strategy. But now, with Mr Walpole and his team closely connected to the passenger commercial side and cargo calling some of the shots, perhaps finally Delta has got it right. Time will tell.