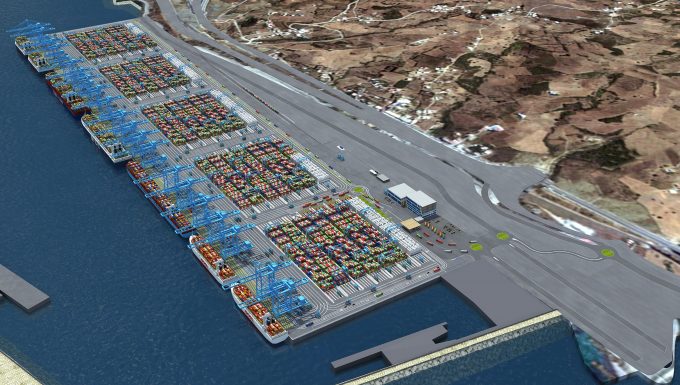 APM Terminals has earmarked another €750m investment in the western Mediterranean after signing a 30-year concession with Tanger Med Special Agency (TMSA) to develop a 5m teu capacity terminal at the Moroccan port of Tangier.

This may prove to be one of its boldest investments in recent years.

In a statement yesterday, the terminal operator said the facility would begin operations in 2019, most likely with Maersk Line as its anchor client – its sister company was specifically named as “an important customer”.

The deal represents a growing concentration of transhipment activity at either end of the Mediterranean basin, leaving centrally located transhipment hubs such as Gioia Tauro and Malta exposed – and will add to AMPT’s existing facilities at Tangier and Algeciras in Spain, a few miles north across the straits of Gibraltar, which handled 1.7m teu and 3.5m teu last year respectively.

The western entrance of the Mediterranean – at the crossroads of three east-west trades (Asia-Europe, southern transatlantic and Asia-US east coast via Suez) and two north-south trades (Europe-Africa and Europe-Latin America) – has the potential to develop into one of the great global transhipment hubs.

APMT said: “The location of the Tangier and Algeciras facilities provides a natural transhipment location for cargo moving on vessels to and from Africa, from Europe and the Far East on the primary east-west shipping route through the Mediterranean Sea; over 200 cargo vessels pass through the Strait of Gibraltar daily on major liner services linking Asia, Europe, the Americas and Africa.

“While African ports at present account for only 4.5% of global port throughput (including transhipment cargo), the United Nations 2015 World Population Prospects Report projects that more than half of the world’s population growth between 2015 and 2050 will occur in Africa, with the African population more than doubling from 1.1bn to 2.4bn over the next three and a half decades.”

Similarly, the development will see the deployment of much of the cutting-edge container handling technology that APMT has employed in Rotterdam.

Interest in the location is not limited to Maersk/APMT of course. The Loadstar learned recently, from a senior figure in finance, that access to the port, and a financial stake in it, was the principal reason behind CMA CGM’s 2007 acquisition of Moroccan state-owned shipping company Comanav.

The really interesting question is what added-value can be brought to bear on container supply chains further down the line?

Will APMT look to offer trans-Gibraltar Straits connections between its two ports? What’s the potential for the adjacent free-trade zone – modelled on Jebel Ali – to offer a menu of logistics of additional manufacturing services?

And what opportunities will it offer Moroccan industries, which have already carved out a niche in the apparel production for fast fashion lines?