Analysis: Maersk facing stress rather than distress, but profits likely to be under pressure 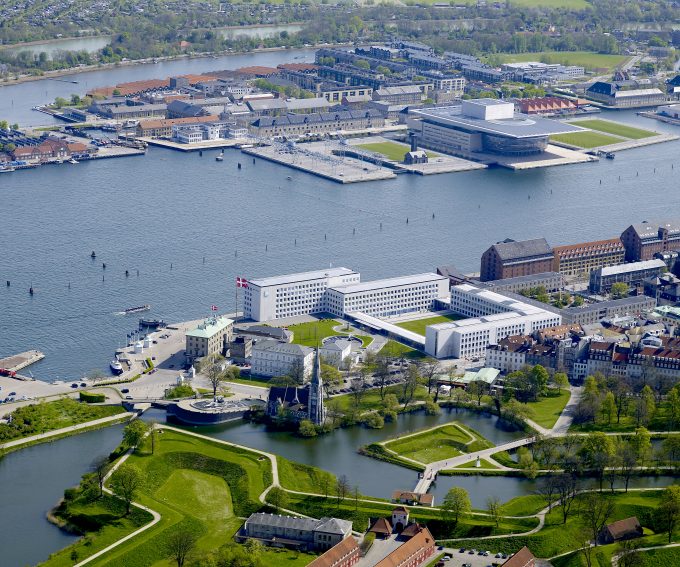 There was little surprise in either shipping or financial markets that Maersk delivered a disastrous trading update this month – the stars simply refuse to align, while recent corporate decisions and trading updates reveal a lot about how its management perceives financial and market risks these days.

Second-quarter results weren’t great, as we pointed out in August, but investors believed that the world’s largest box line was well prepared for the extreme market conditions that materialised soon after. In those days, its stock traded at Dkr12,570 – some 20% away from a record high of about Dkr16,000 in February.

Third-quarter results released in November came as the possible takeover of NOL grabbed the headlines, but Maersk decided to play it safe, and although it was rumoured to be a possible bidder for NOL assets, it did not feel the urgency to act.

That was a notable decision, because Maersk knows first-hand how scale drives efficiency in shipping, and a deal could have delivered precious cost synergies. Maersk may have decided to preserve the dividend back then, and its market valuation with it.

France’s CMA CGM eventually agreed to acquire NOL in December – it may or may not have been a missed opportunity for Maersk – but by then more serious issues had emerged. Every indication was that poor fourth-quarter results were on their way, while its share price had dropped below Dkr10,000.

Currently Maersk shares trade at Dkr8,500, nearly 50% below last year’s zenith, and it doesn’t look good for income investors – dividend risk is apparent through to 2017.

What is going on?

The most relevant question for shareholders is whether its dividend policy is sustainable, and I believe investors have reason to be increasingly concerned about dividend prospects into 2018.

Profits are likely to continue to be under pressure this year, while impairment risk could well impact reported income into 2018, which could push the pay-out ratio in the danger zone – on a trailing basis, its pay-out is well over 100% once impairment charges and other one-off items are considered.

“With regard to dividend payments, it is the group’s objective to increase the nominal dividend per share over time; supported by underlying earnings growth,” Maersk’s investor relations team told The Loadstar.

It pointed out that the underlying profit was $3.1bn, which is the number “you should pay attention to, whereas the $925m you mention is the reported profit”.

Well, it’s my view that freight rates are unlikely to provide a much-needed fillip to its core shipping business, which is in the midst of a “perfect storm” — and what really matters here is cash flow. Moreover, dividends per share could rise as the share count shrinks, although that is rarely a positive sign of underlying strength, and underlying earnings growth cannot be taken for granted.

Meanwhile, this perfect storm has the remainder of the group’s assets portfolio in its tailwinds – as depressed commodity prices continue to look for direction, and appear to have yet to find a floor, its drilling and oil operations are likely to weigh on income and cash flow generation for at least another year.

APM Terminals got hammered by declining volumes in those emerging markets most dependent on commodity exports – Brazil, Russia and West Africa – and profits declined, despite cost-saving measures and improving revenues.

The turnaround at Damco has to be applauded, but there are more deeply rooted problems in units that need heavier capital investment.

If the dividend is chopped, I wouldn’t be surprised if its relative valuation of over 13-times forward earnings fell, and subsequently if it then took a couple of years to see its shares trade above book value again.

Its current valuation signals stress rather than distress, but it prices-in a discount of about 30% to book value – and Maersk senior management is understood to be privately exercised by the fact that, even though it has consistently been profitable in a loss-making industry and always had piles of cash reserves, its share price has basically been unchanged for the best part of a decade.

The profitability of its core liner unit remains a benchmark in the industry, as the chart below shows. 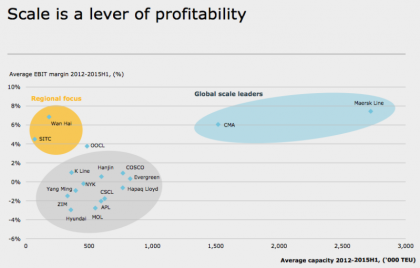 Dividend risk aside, it could see also a relatively dramatic drop in its market value if consensus estimates turn out to be too bullish. Forecasts are for about $2bn of net profit in 2016, which essentially means that stock price relative to earnings could be more expensive than analysts think it is, based on its real net earnings power.

“After a satisfactory result in the first half of the year with a ROIC of 10.2%, Maersk was severely impacted by a widening supply-demand gap across most of our businesses, leading to significant oil price and freight rate reductions,” it noted – adding that ROIC for the second half of the year was negative 6.3%, impacted by impairments of $2.5bn after tax in Maersk Oil, and for the fourth quarter there was an underlying loss of $9m (it reported a profit of $1bn in the comparable period in the prior year).

Maersk also said that the board of directors proposed “an ordinary dividend to the shareholders of Dkr300 per share of Dkr1,000.”

The ordinary dividend remained unchanged on a yearly basis in 2015 after it had grown at a 14.4% compound annual growth rate between 2011 and 2014. Moreover, its yield is now well above mean, and clearly signals risk.

“The proposed dividend payment represents an ordinary dividend yield of 3.3% (2.4%), based on the Maersk B share’s closing price as of 30 December 2015. Payment is expected to take place on 15th April 2016,” it added.

Its forward yield has risen some 30 basis points to 3.6% given its stock performance since the turn of the year. The table below shows the yield associated to Maersk stock, and its dividend per share since 2006. 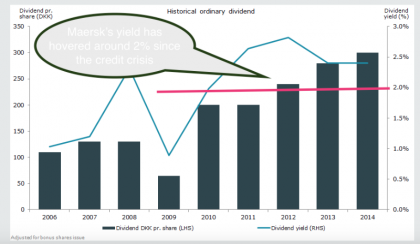 Maersk has returned cash to shareholders in recent years, as the chart below shows, but nevertheless the capital losses amount to about 30%, excluding dividends, since early January 2014. 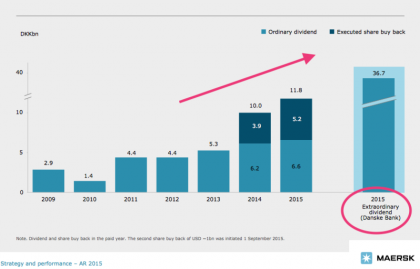 In this context, a key driver for value creation is the outlook for freight rates, which doesn’t look promising. Its drilling and oil divisions, meanwhile, continue to be painfully exposed to the vagaries of the global economy. 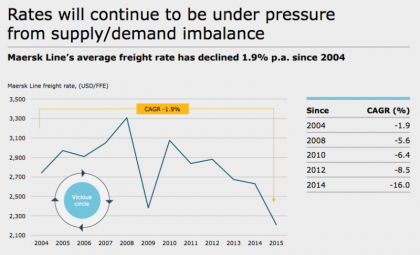 Its gross cash position mildly rose in 2015, which indicates that management is cautious and is aware that these issues could contribute to value destruction – but there is little it can do to fend off inherent cyclical risk, unless it becomes more aggressive and raises cheap debt to acquire distressed assets. That would not be wise, however.

In 2016 it expects an “underlying result significantly below” last year – it plans to hit “$3.1bn”, it said. Gross cash flow used for capex is expected to be around $7bn in 2016, which compares with $7.1bn in 2015. This means that a drop in its core profitability could harm its free cash flow profile – after all, there is less fat on the bone as it continues to combine its operations around the world, and cost-cutting measures cannot last forever.

The chart below shows the level of aggregate free cash flow for 2015 by business units.

All of which leads us to Maersk’s cash flow statements, which clearly indicate that that its gross cash pile and net leverage position give it time, with regard to its dividend policy. In my opinion, Maersk’s corporate strategy points to a cautious approach that is aimed to preserve the dividend, but God knows if it will succeed, given the economic headwinds.

If downward pressure on rates and the downturn in commodities persist for over a year, it may be forced to take a painful decision for shareholders, and halve its dividend to Dkr150 a share. 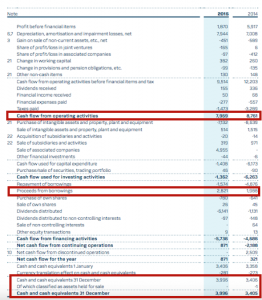 Figures: US$ in millions.

(Source for all charts: Maersk, financial results and presentations)