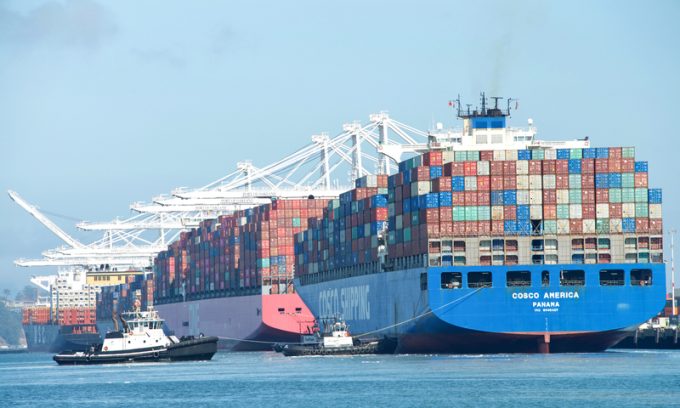 Congestion levels at the major North America container gateways are now expected to persist until the summer, as the consumer-driven import boom continues.

April set new records, according to new data from PIERS, which recorded 31% year-on-year growth in containerised imports to the US from Asia.

It said 1.57m teu arrived from Asia last month, the most on record, and it was the tenth consecutive month for year-on-year growth.

“The container import boom shows no sign of slowing as lockdown eases. This high volume is set to stay with us for the months ahead as the economy recovers,” said Brendan Neary, associate director PIERS by IHS Markit.

The Los Angeles/Long Beach gateway has borne the brunt of the import surge and, during the first months of the year, has already handled 3.1m teu, an increase of 46% on the same period last year, PIERS said.

However, US east coast ports, which handle a large volume of imports from South-east Asia via the Suez Canal, saw their market share from Asia drop slightly to 33% in the first four months of 2021, compared with the same period in 2020.

A Hapag-Lloyd customer advisory this week warned US importers and forwarders: “All [west coast] terminals are extremely congested due to the spike in import volumes and, based on current projections, the congestion is expected to last until through the summer.”

At the Port of Los Angeles, there are 10 vessels at anchor waiting for a berth and Long Beach records nine waiting, and despite both ports putting in considerable efforts to increase the speed of cargo through their terminals, they are constrained by intermodal capacity limits.

“The LAX/LGB rail operations from all terminals continue to deteriorate due lack of rail capacity and railcars from the UP rail. This is affecting all on/off dock intermodal,” said Hapag-Lloyd.

It also noted that congestion levels at Oakland had reached similar levels, with 20 vessels waiting to berth on Friday.

The carrier added: “Massive import volumes combined with labour shortages are the biggest drivers of continued congestion and vessel operations delays. While exports and empty inventory have eased recently, congestion focuses on the import surge over the last month. On-terminal imports are averaging up to 50% over previous months.”

In the first four months of the year, Oakland saw imports increase 19% year on year, to 731,000 teu. At the same time, however, it saw exports decrease in April by 3.1%, year on year, due to the continuing shortage of containers available to US exporters.

To hear more about shippers’ transpacific pain, check out this clip from The Loadstar Podcast.

Or listen to it all, go here.