News / Tugs manage to refloat grounded APL Vanda, but there are fears over ULCV salvage 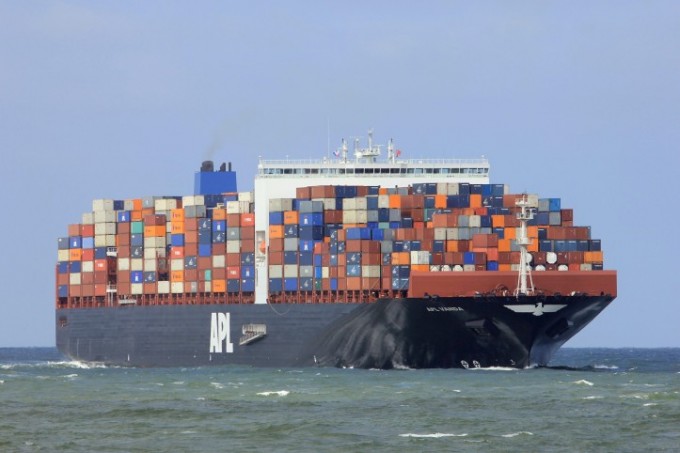 The 13,892 teu APL Vanda was refloated from Bramble Bank in the early hours of yesterday after being deliberately grounded following a loss of power.

The vessel was on its way into the UK south coast port of Southampton on Saturday evening, when, said the Maritime and Coastguard Agency (MCA), the ultra-large container vessel (ULCV) had “executed a controlled grounding”.

Local reports said that the ship had been grounded by its stern with half of its rudder remaining out of the water.

Eight tugs successfully pulled the ULCV off the sand bar shortly after midnight and towed it into the port for inspection.

The 150,000dwt vessel was en route from Le Havre with a pilot aboard when an “engine blackout” occurred, putting the ship at the mercy of strong currents and high winds – making a grounding the only option.

Bramble Bank is an arrowhead-shaped piece of sand off Cowes, Isle of Wight, that is uncovered at low tide and can also be affected by prolonged easterly winds. It is a well known hazard for shipping in the Solent.

However, in extreme cases grounding on the sand bar can prevent a disabled ship from drifting and the car-carrier Hoegh Osaka beached itself there last year when it began listing dangerously after shortly after departing Southampton.

The big danger for ships on the Bramble Bank is that they will sink deeper into the sand with each tide. Further complications for the APL Vanda were prevented by the swift action of the port in sending tugs to the scene.

The APL Vanda grounding is the second casualty within a week involving an ULCV in North Europe. The 19,100 teu CSCL Indian Ocean was deliberately grounded in the River Elbe after losing power on its approach into the port of Hamburg.

Investigations are continuing as to why the CSCL ship lost propulsion, and a contact at the carrier’s Hamburg office remained tight-lipped when The Loadstar spoke to him last week.

Suffice to say, these state-of-the-art ships should not be breaking down. Indeed, if the circumstances had been different – for example, if there had been a loss of power while the ship was in heavy weather – it could have been catastrophic.

Moreover, if an ULCV becomes grounded there are no facilities immediately available that can discharge containers from these behemoths in order to lighten them. According to a Loadstar source, the CSCL Indian Ocean salvors had ascertained that the nearest floating crane with sufficient height and reach to offload its containers was in Canada.

It is a concern that the general shortage of salvage facilities to tackle marine disasters is compounded by the absence of suitable equipment that can deal with the new breed of megaships.