News / Telemetry and eBLs can offer a solution to misdeclared cargo 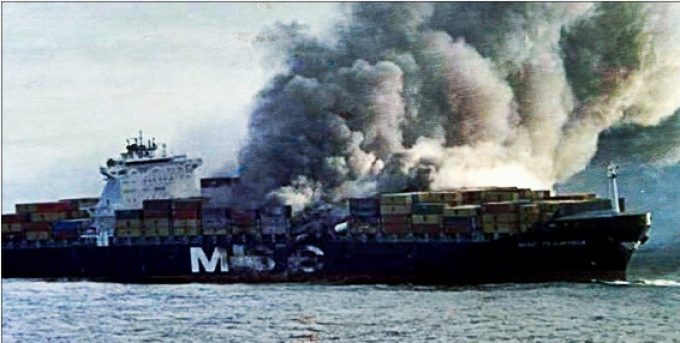 Container shipping could be on the cusp of a new era of safety and transparency, thanks to a combination of container-telemetry devices, and electronic bills of lading (eBLs), leaving less room to hide for shippers misdeclaring their cargoes.

The ability to measure changes in temperature in real time potentially overcomes one of the main problems shipping lines have been struggling with for a long time – the early detection of, and tackling of, fires inside containers.

“As an incident starts to unfold, having that early warning is crucial in terms of firefighting. Ships have smoke detection systems… but by the time smoke is coming out of the container, it is often too late,” explained TT Club’s loss prevention MD Mike Yarwood. “Under deck, you might have a fire incident developing, known to nobody until smoke starts billowing out from under the hatch covers.”

Mr Yarwood said that the MSC Flaminia was a good example of this, wherein a tank container was already increasing in temperature at the time it was loaded.

But telemetry also poses benefits for insurers after the fact, in terms of allocating liability, Mr. Yarwood explained: “In some of the fires, it’s very difficult to pinpoint where the fire originated from… in catastrophic cases millions of dollars are spent by various parties trying to determine this.”

Meanwhile, developments in digitalisation are speeding up. Earlier this week, Digital Container Shipping Association (DCSA) introduced the final phase of its electronic bill of lading (eBL) proof of concept (PoC), which aims to have a fully interoperable standardised eBL document.

Mr. Yarwood said there was a likelihood that digitalising the bill of lading would have benefits for transparency.

Various shipping lines – including Hapag Lloyd — are working on machine-learning algorithms which seek out suspicious keywords and descriptors, the markers of potentially misdeclared cargo. Having a digitalised dataset would expose these to greater scrutiny, Mr Yarwood said. “With data in digital form, it will be easier to interrogate.”

He added: “It probably makes things a little more transparent. If we combine machine learning, constantly update those keywords and descriptors, the systems have the ability to become ever-more refined. Whether it would discourage bad actors — I’m not convinced. I think there would still be willingness to do that.”

But Mr Yarwood warned that technology companies looking to get into the maritime industry might end up with more responsibility than they bargained for. “It comes back to the matter of who owns the data,” he said. “If that’s the provider of (live telemetry or digital eBL) technology, and I, or somebody else knows they have that data, they’re going to get pulled into litigation.

“I would be surprised if they weren’t drawn into some of the bigger cases, going forward.”