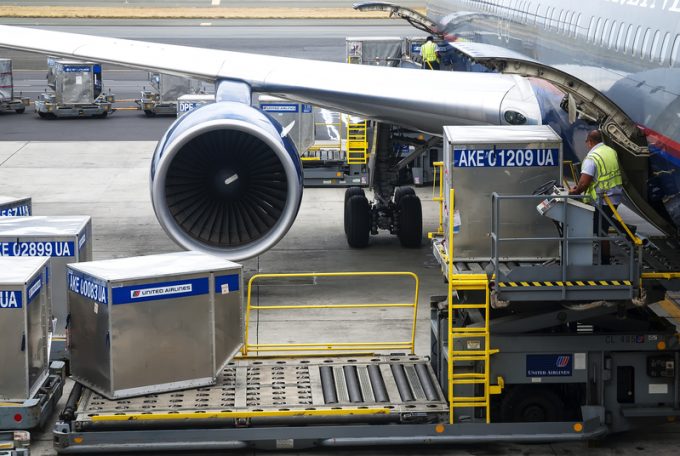 While it is chaos on the high seas, air freight out of China has seen demand slow – slightly – after Apple delayed a product launch, leaving unexpected capacity in the market.

However, noted Flexport this week, this was a “short-term blip before the market is expected to gain strength, hitting a mini-peak ahead of the Golden Week holiday in early October”.

It predicted continued strong demand and “very tight capacity” after the holiday as well.

Demand from key destinations in South-east Asia is also strong, while capacity again remains an issue. Within Asia, capacity is being provided by both passenger and freighter aircraft, according to data from IATA.

At the opposite end of the scale is the transpacific, where capacity is now 90% freighters. 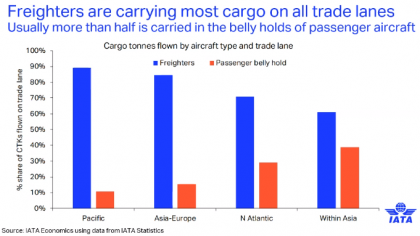 While Flexport reported little change in markets ex-North America, a recent Clive Data Services report shows eastbound Atlantic load factors increased from 62% at the start of August to 68% at the end, despite a capacity increase of 3%, which managing director Niall van de Wouw said was “remarkable”.

Load factors on the lane are now 26 percentage points higher than in the same period of last year.

Flexport said it expected to see continued reduced passenger capacity on the route and, therefore, a trend towards increasing rates.

As in ocean freight, the Latin American market has rebounded somewhat, but IATA warned that it could face worsening capacity problems.

“The Latin American market is shrinking smaller than Africa,” said IATA economist Brian Pearce. “It faces the challenges of controlling the virus and the lack of government support from airlines.

“It could face a shortage of capacity, as many carriers there are now working under bankruptcy conditions.”

In Europe, Flexport said the market continued to be volatile on Far East westbound, which was also preparing to move into peak season after October. Currently the market is open, and rates are stable and “at the lower end”.

However, the “lower end” this year is a far cry from last year. Yields have soared while capacity has sunk. 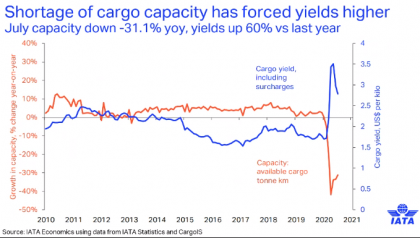 The industry is trying to restore some capacity – some 2,300 passenger aircraft have been designated as cargo-only, with 150 of them going so far as to remove the seats. And freighter utilisation is at record highs, at nearly 11 hours a day.

But despite the capacity additions, yields remain high.

“Cargo has become an important source of revenue for airlines,” said Mr Pearce. “It had been a declining portion, but is much more significant now.”

In previous years, cargo accounted for about 12-15% of airline revenues – similar to business class. Now, it is up to more than 25%. But, he added, “the passenger market is still so weak, it won’t make much difference to most airlines.”

Losses for 2021 across the airline business are expected to be some $15bn.