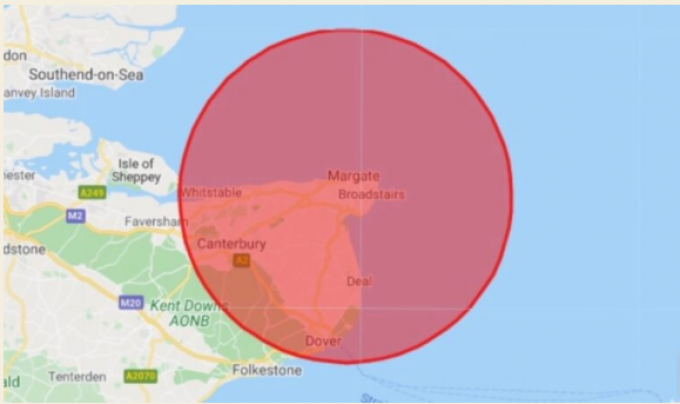 UPDATED 2 SEPTEMBER TO INCLUDE A QUOTE FROM RIVEROAK STRATEGIC PARTNERS

Protesters against the re-opening of Manston Airport as a cargo hub have claimed developer RiverOak Strategic Partners (RSP) is violating CAA rules by restricting consultations to a select group of people.

Despite a CAA map showing that some 30 towns and villages will be affected by the development, airport director Tony Freudmann told a Save Manston Airport meeting public consultations would be in just two locations.

But the protesters, which have set up the Campaign Against the Re-opening of Manston Airport (Carma), said the CAA consultation process was governed by rules called the Gunning Principles, which state: “The airspace change sponsor [Manston] must enter the consultation with an open mind and take all views into consideration.”

They added that under the CAA procedure, “failure to deliver an open, fair, transparent and effective consultation will result in the process being scrapped”.

Carma also claimed stakeholders, including East Kent councillors and community organisations, have had their concerns rebuffed by RSP. The Ramsgate Society, which was not invited to two RSP meetings, has filed a complaint with the CAA.

However, a spokesperson for RSP told The Loadstar: “These comments are inaccurate and misleading. The CAA’s CAP 1616 airspace process is carried out in seven stages, with 14 very precise steps and includes four process ‘Gateways’ beyond which we are not allowed to proceed unless approved by the CAA. We are currently at Step 2a and in accordance with CAP 1616, we developed a wide range of options – including many that will never be used – to elicit the opinions and views of other airports, the aviation community, local MPs, all of the key regional authorities, and almost 90 town and parish councils in East Kent. The focus of Step 2a is to present as many options as possible to enable stakeholders to have their say on what factors we should take into account when further developing our proposals.

“As a result of this stakeholder feedback, we are now applying CAA guidance to reduce these options to a longlist that we know are operationally feasible and safe. This will include a full environmental and noise assessment, before the CAA approves us to move forward to full public consultation at Stage 3. We anticipate that our full public consultation with local residents, businesses, the public and other stakeholders will take place during 2021.”

The re-opening of Manston as a UK air cargo hub, despite a series of air cargo consultants expressing serious doubts over the viability of the plan, is set to become a battleground between supporters and protesters. Logistics sources have questioned the value of its location in the far south-east of the UK.

Manston air freight hub development can go ahead, but protestors won't give up

Anti-development campaigners were dealt a blow when a judge dismissed an plea for a judicial ...