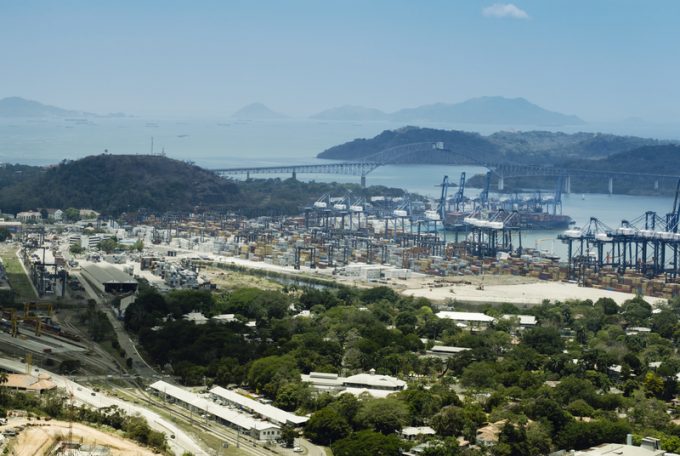 A new port community-type system that could transform competing container terminals in Panama into an integrated centralised information hub serving both the Atlantic and Pacific oceans is under development.

Delegates at this week’s TOC Americas Container Supply Chain event in Cartagena heard how terminals, encouraged by Advent Intermodal, were beginning to work together to develop the ‘Portal for Panama’ to increase cargo visibility.

Stephen Shaffer, president of Colon Container Terminal, said: “Until now there has been a bit of gap in terminal transfers, and what we are trying to provide with this platform is a Panamanian base for our customers. No one terminal can handle all the volumes, but collectively we can. and this platform allows a diverse group of customers to have trust in the overall system

Allen Thomas, chief strategy office at Advent International, said: “Panama is different place to many ports because it is small but very fragmented, and with very intense competition between the terminal operators, and it is a challenge for terminal operators to retain their volumes because carriers are looking for efficiency and there are lots of transhipment options in the region.

“Our intention was to create a platform to foster collaboration between the disparate operators,” he said.

The portal’s architecture is based on fulfilling three key aims: first, to create a single place where any stakeholder in Panama can go to and be able to integrate that directly with their platform.

Secondly, it intends to introduce a vehicle booking system for terminals’ truck gates; VBSs have proved effective in reducing congestion on roads around terminals and at their gates elsewhere in the world.

Thirdly, there will ultimately be automated fee payment and collection functionality.

“We have now completed integration with Manzanillo International Terminal (MIT) and we are starting to test with CCT,” Mr Thomas said.

Juan Carlos Croston, vice president of marketing and corporate affairs at MIT, explained that one of the challenges facing terminal operators Panama dealing with inter-terminal transfers was reducing the normal seven days it takes for a box to move from one coast to the other.

“The network configuration of the shipping lines means they have it in their minds that the transfer can be done in five days, and it has been up to us to prove it can be done.

“But to do it consistently we need the sort of visibility this portal will provide – at the moment we have 100% visibility at the berth and 0% once it has left the gate,” he said.

Mario Perez Balladares, managing director of Panama Transhipment Group (PTG), a haulier that undertakes inter-terminal transfers, said there were three options for boxes to cross the country: on board vessels via the canal itself; on the Panama Canal Railway Company’s trains; or through his fleet of trucks.

He said the railway was able to transport around 1,000 boxes a day, while PTG has daily capacity for around 700.

He said the transparency the portal promised would be key to improving productivity: “7% of the world’s trade moves through Panama, and the country and the way we do business going to be watched by the global commerce – we have to have transparency and we need to have a consensus amongst the port community here to see it though otherwise Panama will be jeopardised.

“We are carrying 700 boxes each day but we have to be very careful about what we are carrying – there is a lot of money laundering and other activities and doing due diligence is really, really important,” he said.

Better visibility and more responsive supply chains are the only way for shippers and their ...

'Ship agents must reinvent themselves, or they won't survive'

Ship agents will need to reinvent themselves as information providers to shipping lines, if they ...

Maersk Line appears to be continuing its process of vertical consolidation, admitting it is on ...