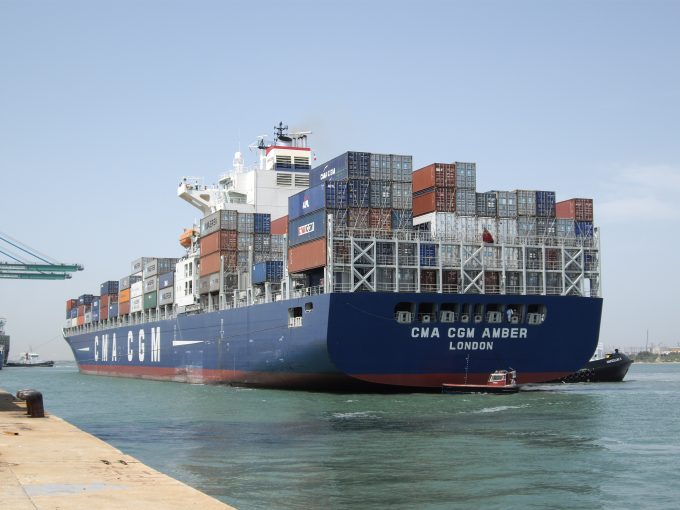 The Ocean Alliance, which next April will be the biggest of the three vessel-sharing alliances, has published its pro-forma network, including port rotations for each service loop.

“The signing of the ‘Day One Product’ marks an important step forward to show just how committed we are in developing the most competitive products to market and the high level of synergy and confidence we share in the partnership,” said member carriers Cosco, CMA CGM, Evergreen and OOCL, in a statement.

According to Alphaliner analysis, the Ocean Alliance is set to dominate both the transpacific and Asia-Europe trades in terms of capacity, when the current four alliances become three next year.

On the transpacific, it will offer about 39% of market capacity, compared with 28% from THE Alliance (once Hanjin’s 7% transpacific share is deducted) and 19% from the 2M alliance (assuming HMM joins).

On Asia-Europe, the Ocean Alliance will control approximately 35% of capacity on the route, about the same as the 2M,  well ahead of THE Alliance’s around 22%.

However, on both trades Maersk and MSC (2M) have been “the most aggressive” in capturing Hanjin business after its demise, as evidenced by Maersk Line’s 11% year-on-year volume growth in the third quarter, So, in due course, capacity data may need to be adjusted for the 2M.

The US Federal Maritime Commission (FMC) announced on 21 October that it had approved the Ocean Alliance agreement after “an exhaustive review”, and the grouping said it had completed its EU self-assessment compliance review as well as receiving clearance from South Korea’s Ministry of Oceans and Fisheries.

However, the Ocean Alliance still needs to obtain approval from China’s Ministry of Transport before it can commence its services, as will the 2M, if it increases capacity with the inclusion of HMM.

Further details, including vessel deployments and call times, will be released around the end of this month.

“We are very pleased with our progress and close collaboration with our partners in putting together an outstanding selection of Day One products,” said Andy Tung, chief executive of OOCL.

However, the pro-forma network will see ports in Asia and North Europe in particular either celebrating or commiserating, depending whether they feature in the final list of proposed calls. There are still ports shown as “to be confirmed” (TBC), including Southampton as final call on as the Asia-North Europe NEU3 loop and the Baltic ports on the NEU1.

Nevertheless, in publishing its provisional network earlier than expected, there is plenty of time for fine tuning – a situation that has been absent from more recent alliance rejigs – and the Ocean Alliance has put a big stake in the ground.

It has also reacted to the comments emanating from the 2M alliance that shippers could face disruption from the break-up and reforming of the other alliances.

CMA CGM, which at 35% of capacity is the biggest carrier in the new Ocean alliance, said the network would offer “better transit times and greater coverage in terms of loops, ports of call and port pairs”.

The announcement from the Ocean Alliance will put pressure on THE Alliance to publish its pro-forma network ahead of the Asia-Europe contract negotiations.

THE Alliance is still reeling from the shock of the bankruptcy of would-be member Hanjin and the merger announcement this week of the container arms of members K Line, MOL and NYK, leaving Hapag-Lloyd and Yang Ming to lead the network negotiations.