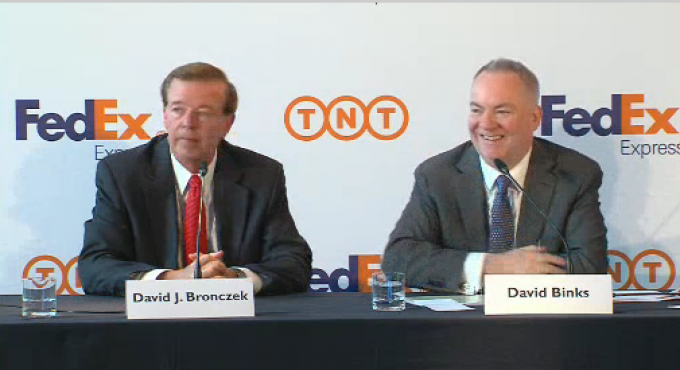 Today marks the start of what promises to be a long process of integration, as FedEx completes its €4.4bn acquisition of TNT.

Speaking at a press conference in FedEx’s new European headquarters, in Hoofddorp, Netherlands, David Binks, head of FedEx Europe and now CEO of TNT, stressed that there would be no immediate change to service quality or networks – and hubs would remain.

“This is one of FedEx’s most strategically important acquisitions. It will take time – but that’s right. We want to execute the integration with absolute precision.”

However, details of the future, including revenue and profit forecasts, were in short supply, except, he said, the road map which had been drawn up would now go into planning.

Mr Binks sought to reassure staff. “The [acquisition] assumes that we will grow bigger, and that means more opportunities for employees. We will work to avoid significant reductions.”

He added that TNT would remain as a brand for “the foreseeable future”.

“We have two iconic brands and we will make good use of those brands,” he said.

“We have a lot of hubs around the world. We see it as using regional connectivity. The biggest hub will continue to be in CDG, giving international connectivity for global flights. Lieges will be the regional hub.”

Mr Binks added that other “important facilities”, such as those at Copenhagen, Milan and Stansted, would also remain.

“Part of the planning is to determine how to connect them – it’s a bit early to say exactly how we will use them. We have 657 aircraft, so we need to understand how it all fits together. The planning needs time and attention.”

Mr Binks added that it was not just Europe which needed integration.

Mr Bronczek noted that there were many good fits in the two networks, citing FedEx’s 2012 acquisition of Rapidao Cometa in one part of Brazil, while TNT’s operations were in another.

“We have global service partners around the world and we are looking at how we combine the businesses.”

FedEx is putting its faith in the growth of e-commerce in Europe, which it said, several times, would grow at 15% a year, making the market worth €60bn in 2017.

But Mr Bronczek appeared to have no concerns about the move of FedEx’s customer, Amazon, into logistics.

“Amazon is a big customer who we meet all the time. We hear they need our services. If you look at the Wal-Marts of this world, they do e-commerce and have trucks – and they are a big customer. They have their own logistics but need us too.”

“I am really proud to stand next to my FedEx colleagues. Everything we thought about FedEx was true. This deal is right for our customers, our people and our industry.”