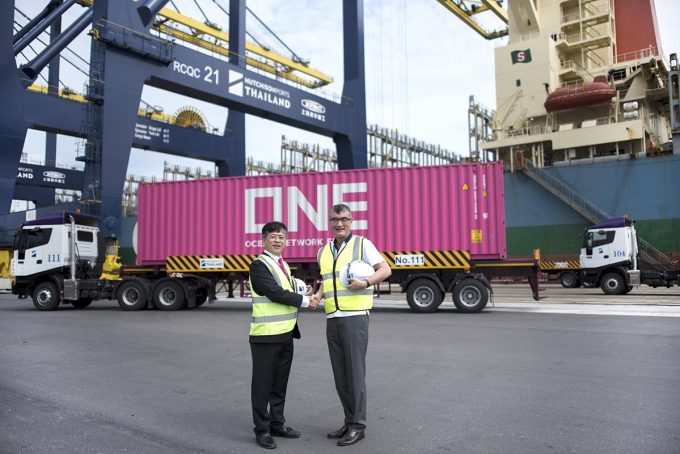 The new deepsea facility could pave the way for a 40% capacity increase in the largest vessels calling at the port, helping Thailand challenge Malaysia and Singapore for coveted South-east Asian transhipment traffic.

Stephen Ashworth, Hutchison Ports’ MD for Thailand and South-east Asia, said the terminal could handle some of the largest container vessels currently in use.

“Some shipping lines are showing interest in deploying 14,000 teu class vessels on port rotations that include our Terminal D,” he told The Loadstar.

The current average vessel size at Laem Chabang is around 3,000 teu, Mr Ashworth said, with the biggest at 10,000 teu.

He said he expected the new facility to be at capacity soon after operations began, “judging from many economic indicators”.

He added: “Including our investment in Terminal D – testament to our confidence in the trade prospects in Thailand and particularly in Laem Chabang port – we also expect to see growth in transhipment volumes in the medium to long term,” he added.

HPT was in need of new capacity following strong growth in recent years, including a 16% jump in volumes in 2017. The terminal operator already handles around a third of Thailand’s total 8.3m teu annual throughput.

According to HPT, Terminal D is an integral part of Thailand’s Eastern Economic Corridor (EEC), a $45bn special economic zone that aims to modernise the economy through improved infrastructure and innovation. The project includes plans to build double-track railways connecting Laem Chabang with key industrial zones.

“The EEC project aims to position Thailand as a hub for ASEAN,” explained Mr Ashworth. “The successful implementation of the EEC concept ensures Thailand’s economy continues to grow by reducing the reliance on more traditional industries such as vehicle manufacturing. This, in turn, will help to sustain export and container growth, with Hutchison Ports clearly an integral part of this.”

Meanwhile, bidding on Laem Chabang’s third expansion phase will commence in October, according to the Bangkok Post. Due for completion by 2025, Terminals E and F will increase the port’s capacity from 7.7m teu to 18.1m teu.

Mr Ashworth declined to comment on the viability of this much additional capacity, noting that this was “the responsibility of Port Authority of Thailand”.

Hutchison has not yet said whether it intends to bid on the additional terminals.

Supply chain radar: ONE direction is no aberration

Like its competitors, Japanese container line ONE recently delivered a very strong set of interim ...

Stevedores in Australia have implemented “staggering” increases to terminal access charges and road and rail ...

Australia’s empty container depots – and at least one major stevedore – have agreed to ...

Japanese shipping bosses bullish for the new year, but all fear demand slowing

CMA CGM has finalised the terms of its sale of 10 terminals as it seeks ...