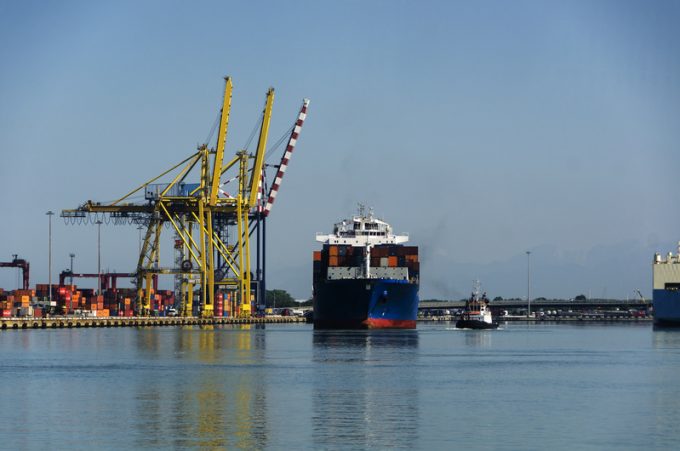 Entrepreneurial logistics players are turning away from the highly congested transpacific market to cash in on the equally buoyant but less-congested Asia to Europe trade.

Alphaliner today said it had taken note of two new carriers on the route that had chartered small containerships to carry their own cargo and tap the lucrative spot market.

Italian logistics company Rif Line has chartered two 1,100-1,200 teu ships for around a year to ply between Asia and the port of Civitavecchia, near its headquarters in Rome. The 1,118 teu Iberian Express is chartered for 11-13 months for $35,000 a day.

The 2008-built feedermax had loaded in Taicang and Shanghai and, according to vesselsvalue.com, is due at Suez at 3pm tomorrow. The forwarder is offering a second sailing from China this week, by the 1,200 teu Cape Flores, fixed for a 12-month charter at $39,000 a day.

The consultant said: “The newcomer is paying a very high price for these small ships, but current spot rates between Shanghai and Genoa stand at nearly $14,600 per 40ft, according to the Shanghai Containerized Freight Index. This means a westbound trip could generate $7.3m of revenue if 500 feu of spot cargo is carried.”

Charter hire for the round trip would eat around half of this revenue and, after port and bunker costs, Suez Canal tolls and agency fees, the forwarder might struggle to turn a profit. However, it is investing in greater supply chain certainty, which its customers would regard as priceless.

The second ‘newcomer’ on the routed identified by Alphaliner is EShipping Gateways, a joint-venture between OOCL Logistics and JD Logistics (part of e-commerce retailer JD.com) which has already offered several sailings from Asia to North Europe.

The first EShipping Asia-North Europe sailing was by the 3,674 teu Lyme Bay, which arrived at Hamburg from China on 23 June. Hamburg-headquartered liner agency PWL Group represented EShipping for the vessel’s call.

PWL was also the agent for the call of the 2,702 teu Goofy, which discharged at both Hamburg and Zeebrugge on 1 September. According to PWL, the vessel discharged and loaded 600 containers during its call at HHLA’s Burchardkai terminal in Hamburg.

The vessel was actually operated by Singapore-based Sea-Lead Shipping in partnership with EShipping and Dubai’s Volta Container Lines.

Sea-Lead was founded in March 2017 as an NVOCC, purchasing slots from shipping lines, but in October that year started operating its own vessel between Jeddah and Port Sudan. Now, according to PWL, regular sailings are planned from China to North Europe.

“Further sailings are under operation from China with the Manet (2,272 teu) by the end of September and the SL Tweety (2,490 teu) by mid-October,” it said.