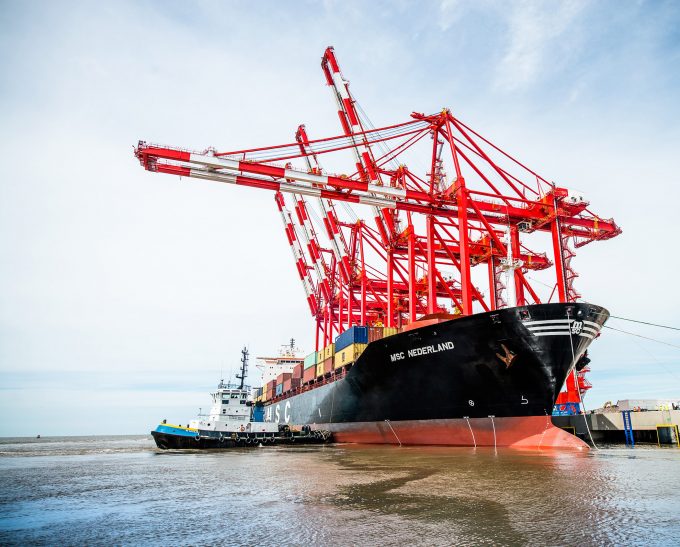 This story has been updated with the following statement from MSC.

“The Loadstar incorrectly reported that MSC has announced the suspension of bookings of cargo for export from the UK. In fact, MSC continues to accept bookings on all trades and has worked hard to provide continued service to customers amid a challenging and congested market.”

2M partners Maersk and MSC are swapping Felixstowe for Liverpool on their TA2/NEUATL2 transatlantic loop from the end of the year, in order to “provide stability to the service”.

The last sailing from Felixstowe will be by the 8,822 teu MSC Athens in week 51, with the first sailing from Liverpool by the 6,478 teu Maersk Sembawang planned for the following week.

“After careful evaluation of our network covering North Europe to/from North America, we will change our UK port call from Felixstowe to Liverpool,” said a customer advisory from Maersk.

This was, no doubt, behind last week’s decision by MSC, in partnership with GB Railfreight, to launch a five-days-a-week rail service between Liverpool and the East Midlands.

The 2M said it would continue to blank its TA4/NEUATL4 transatlantic loop “until further notice”, but according to Alphaliner, the average weekly capacity on its three remaining strings has increased by 16.5%, to 19,800 teu, with the deployment of larger ships to compensate.

The news of the lost transatlantic service is a further blow to the port of Felixstowe which, among UK container hubs, has come under the most pressure from the surge in import volumes.

Inherent issues with its problematic vehicle booking system have also been a factor in landside congestion and slow ship working. Carriers have diverted a number of calls to continental ports in the past month, leaving thousands of UK imports effectively stranded due to the absence of any prompt relay options.

Meanwhile, the situation at DP World Southampton has deteriorated, with the port seeing the cancellation at the weekend of the call by the NYK Deneb on THE Alliance’s transatlantic service and, today, the omission of the CMA CGM Kerguelen.

“Congestion and delays at the port of Southampton have deteriorated recently and we are now witnessing similar issues to those at Felixstowe,” said Brentwood-based forwarder Westbound Logistics.

“In the past week, there have been weather closures due to fog, a shutdown in customs software, vessel delays and the emergence of the serious restitution issue. This has resulted in failed deliveries, further transport backlogs from the port and more price increases on urgently required deliveries,” said Westbound.

Moreover, the situation is set to get worse for UK importers as carriers consider their options for January.

The Loadstar understands that the Ocean Alliance is drawing up plans to omit the Felixstowe call throughout January, with all UK cargo to be discharged at Zeebrugge and feedered back to “other less-congested ports”.

A source at one of the alliance member lines told The Loadstar today the decision needed the final agreement of other partners, but the only real hurdle was the lack of available feeder tonnage.

Meanwhile, ocean carriers are keeping their options open on how they serve the UK, which is bad news for exporters. Indeed, several carriers have, officially and unofficially, told UK shippers they would suspend acceptance of export bookings.

The big fear for UK importers and exporters is that, even after the current pressures ease, the UK will be relegated to the status of a feeder trade.