WorldACD has published another set of data, asking whether the pessimism over the air cargo market, which has seen growth slow, is realistic.

“Year-on-year USD-yield improvements in the Americas were well below 10%, much lower than elsewhere in the world,” it said.

Interestingly, WorldACD also revealed a break with the conventional wisdom – at least up until 2009 – that air cargo generally grows at twice the rate of GDP.

The table of 13 countries shows their GDP growth and air cargo growth, and there is clearly a lack of correlation. Brazil, for example, had among the highest growth in air cargo volumes, but saw limited GDP growth of just 1.2%. China’s GDP grew 6.8%, yet outgoing volumes fell and incoming cargo volumes were at 4.8%. 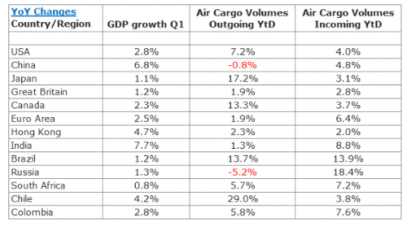 Finally, the research and data organisation asked which carriers had fared well, pointing to assumptions that growth in one particular region would likely help the home carrier of that region. Not so, it discovered.

“The African carrier group was the only one improving its (small) market share in all regions. So did carriers from Asia Pacific, except in their home area.

“Lastly, the group of European carriers gained share everywhere, except in their home market Europe…

Drewry also released its East-West Airfreight index today, showing that rates fell 1% in May – but it expects to see transpacific demand in June trigger a slight rate rise.