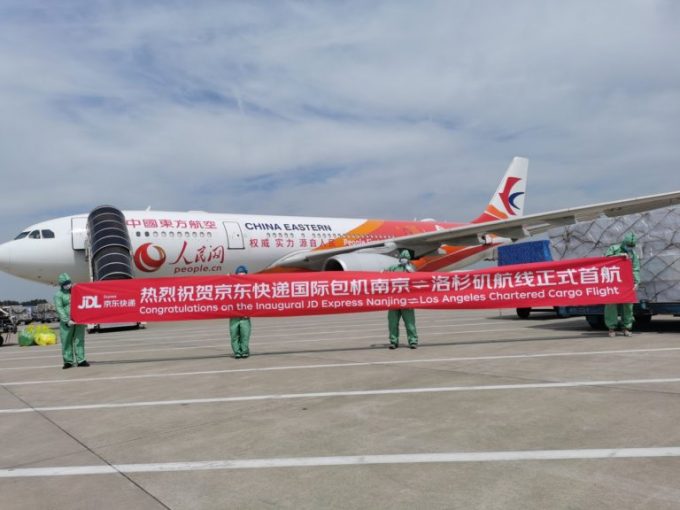 Frustrated by the global supply chain crisis, China’s JD Logistics has ambitions to acquire “no fewer than” 100 freighters by 2030.

In the second quarter, the logistics unit of e-commerce giant JD.com launched its first self-operated charter flight, between Shenzhen and Bangkok, to tap into South-east Asia’s huge cross-border e-commerce growth.

Soon after, a second charter flight was added, between Nanjing and Los Angeles, operated by China Eastern, carrying apparel and fast-moving consumer goods from its Shanghai and Shenzhen warehouses.

“Covid has heavily impacted the global supply chain industry,” he told Bloomberg TV. “Many companies have encountered different challenges and difficulties  and we’ve seen a shortage of resources in shipping and airfreight.”

JD was quick to control its own container shipping capacity, launching EShipping Gateways, a joint-venture with OOCL Logistics, which offers several sailings from Asia to North Europe.

Although Mr Yu believes the supply chain disruptions are short term, he says JD is preparing to set up its “own air freight company, which was recently approved by authorities”.

He added: “In the future, we might also own airfreight companies in other countries. By 2030, I would say there won’t be fewer than 100 planes [in JD’s fleet].”

Mr Yu said the company would also “invest massively” in warehouses in North America and Europe over the next two years, building hi-tech automated logistics centres, explaining: “We can provide more support to Chinese sellers who want to do business abroad.

“Plus, China is the world’s largest consumer and has a great demand for overseas products.”

JD rival Alibaba logistics-arm Cainiao is also expanding rapidly to overseas markets and is, perhaps, further ahead in terms of airfreight, having launched partnerships and charter agreements with several cargo airlines. Earlier this year, for example, it teamed up with Hong Kong Air Cargo for South-east Asian e-commerce shipments and this month bought a 20% stake in Air China Cargo.

Both JD and Cainiao have lofty targets to deliver worldwide e-commerce shipments from China within four days and three days, respectively. And Mr Yu said there was still a huge market with rapid growth up for grabs.