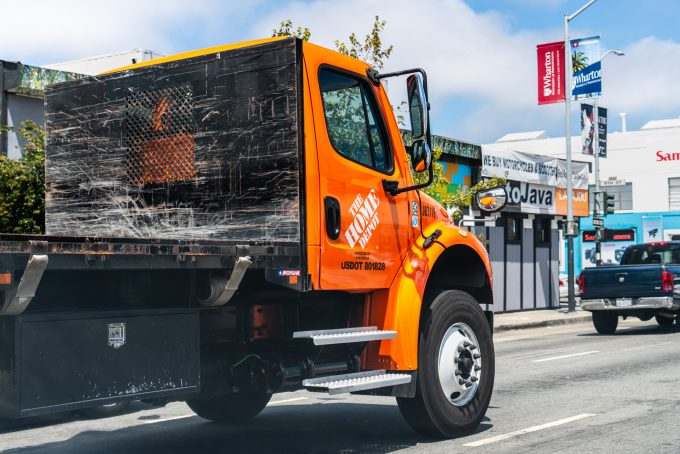 Home Depot, one of the world’s ten largest retailers, is taking an increasingly proactive approach to its transport capacity.

Having secured a cargo ship a few months ago, to move its essential cargo from Asia to its home market, the company is now offering open capacity on flatbed trucks, used to deliver its goods to other shippers through an online freight brokerage platform.

In June, the giant retailer of home improvement supplies turned heads when it decided to charter a ship to carry goods from Asia to North America, but it was not the only large company that resorted to this extreme tactic. Now Home Depot is blazing a trail by sharing space on flatbed trucks with other shippers.

The retailer has teamed up with Loadsmart, a trucking brokerage, and on 29 September, they launched a cloud-based platform called Flatbed Manager. Using artificial intelligence, this matches unused capacity on flatbed trucks used by Home Depot – usually on the backhaul leg – with shippers looking for trucking capacity. The system offers space on routes at a set price.

“Automated supply-led booking doesn’t exist at scale today, not for lack of interest, but because of feasibility challenges,” said Felipe Capella, co-CEO and president of Loadsmart.

“In order to begin with capacity instead of a shipment, the broker’s AI system must know exactly where a truck will be, empty/full status, driver hours of service, the price that is needed to move it, and where it wants to go. Through our work with a forward-thinking shipper like Home Depot, we’ve been able to implement this novel approach that makes dedicated fleets more efficient via technology while greatly reducing risk.”

According to the pair, the new model constitutes a win-win-win situation for both shippers involved and the trucker. A shipper looking for capacity is able to latch on to an empty leg at an attractive price, the trucker maximises what would otherwise often be an empty leg, and Home Depot achieves lower transport costs and may be able to scale up its capacity use through elevated volumes from takers on the backhaul.

In addition, this solution reduces carbon emissions, they pointed out.

Home Depot has invited truckers it uses for its traffic to join the platform. For its part, Loadsmart has been talking to other shippers that use dedicated trucking capacity to bring this to the platform.

One of the large obstacles for the concept of supply-led truck brokerage has been the need for a shipper with a large dedicated trucking operation to come onboard to provide a suitably large capacity base, which makes Home Depot a likely important catalyst for the model to flourish.

Mr Capella is convinced it will take off from here.

“Automated supply-led options will become increasingly important to the future of freight brokerage,” he predicted.

Companies that have their own truck fleets will likely take notice. There are already stirrings in this arena towards collaboration with a view to maximising capacity. Johnsonville, a large sausage producer with a proprietary fleet of reefer trucks, recently set up a transport and logistics arm to offer spare capacity on its trucks, as well as on carrier partners, to other shippers.

For more information on how shippers are changing their supply chain strategies, listen to this clip from the latest The Loadstar Podcast, from Accenture’s Sarah Banks.

After an extended run on the high road to profits, the US trucking industry appears ...

RTR: Loadsmart valuation hits over $1 bln after SoftBank-led funding round

Walmart’s new third-party delivery service, GoLocal, is starting with a bang. The first customer to use ...

Logistics providers and truckers are pushing each other in a ‘technological arms race’ to offer ...