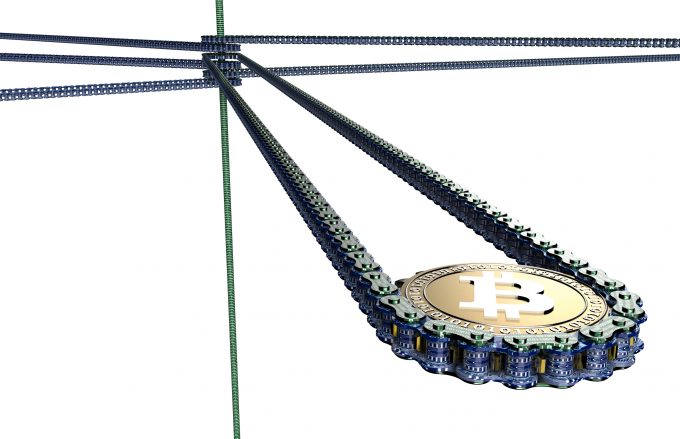 Never let it be said again that the freight industry is slow to adopt new technologies.

Just a few weeks after a senior consultant told The Loadstar that blockchain technology would not be used in logistics before 2018, a freight forwarder has announced its first deployment.

Marine Transport International (MTI) is using blockchain technology for sharing verified gross mass (VGM) information for the new container weighing rules, after working on the platform for the past 18 months.

But first: what is blockchain? Essentially, it is a very secure way to disseminate information between parties. It creates a permanent, digital public ledger of transactions which can be shared among a distributed network of computers.

Developed originally to monitor and secure bitcoin, blockchain maintains a continuously growing list of records or transactions, called blocks, which are secure from tampering, hacking or revision.

To hack in would require every block in the chain to be altered, while there is no need for a central authority.

Users can “record and retrieve data from anywhere in the world using mobile phones, tablets and PCs, eliminating the need for costly, proprietary infrastructure”, according to MTI.

“Blockchain has the ability to empower our industry into a true digital age,” said Jody Cleworth, MTI’s chief executive.

“Instead of a VGM message being delivered sequentially to parties within the supply chain, our platform can provide a decentralised approach to delivering VGM messages. The sheer volume of containers processed per year means that safely decentralising the management of these containers will radically reduce the complexities of shipping.

“A grass roots approach in collecting and storing information on the blockchain is how shippers will be able to reap the full benefits of the technology. We are now a public blockchain company and our focus is on delivering tangible benefits to global trade and all the actors within the supply chain.”

Better still, there are cost benefits, he added.

“It is relatively inexpensive to implement as the infrastructure for it already exists and/or is provided by third parties. If we take into consideration the current legacy hierarchal EDI systems that are in use today in the industry, the blockchain has major cost and efficiency benefits as it is cloud-based, there are no barriers to connectivity and the transaction costs are relatively low and are based on use instead of subscription.”

So far the technology has been used only rarely, and mostly in the banking industry.

“But what we have here is an example of the shipping industry leading the way in executing a real, proven application of blockchain. We’re incredibly excited to be at the forefront of this development,” said Anthony Abell, managing director of TrustMe.

“It is an integrated global network which will tell you who has it, who broke it, why it’s late. The concept of block chain is a system of verification which has the potential for democratising access to different participants.

“A freight management system is OK, but blockchain is open source. It will require some industry commitment though.”

The technology is expected to have a significant impact on a logistics industry where so many players need to communicate so much information to each other.

MTI noted: “With millions of transactions processed each day in the shipping industry, the public blockchain will not only increase data efficiency, but also provide long term savings for EDI transmission-dependent companies.”

MTI expects blockchain to be used in a variety of solutions, including tracking containers, commercial settlements of bills of lading, customs and security, and big data applications to the supply chain.

If you’d like to know more about new technologies, they will be covered at next month’s TIACA Air Cargo Forum in Paris.